Team Canada through to quarter-finals at World Mixed

Team Canada took an early lead and hung on for a 4-3 win over Poland in the first round of playoffs today at the World Mixed Curling Championship in Champéry, Switzerland. 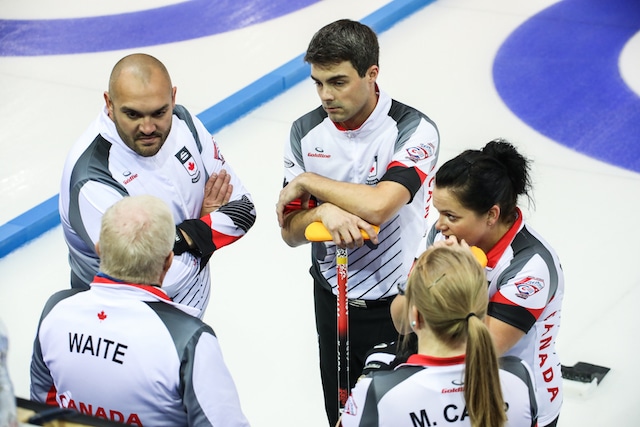 Against Poland’s Andrzej Augustyniak, Trevor Bonot and his Northern Ontario squad of vice-skip Jackie McCormick, second Kory Carr, lead Megan Carr and coach Jim Waite built a 4-1 lead after six ends. Augustyniak managed a single in seven and a steal in eight, but it wasn’t enough to stop Canada from taking a 4-3 win and moving on to the next round of playoffs. Bonot will now face Russia’s Alexey Stukalskiy, who finished the round robin at the top of Group A with a 6-0 record. Stukalskiy defeated Israel’s Adam Freilich 6-3 in qualifying round on Friday morning. Team Canada’s quarter-final game will be streamed live at 1 p.m. ET on the World Curling Federation’s YouTube channel, www.youtube.com/user/WorldCurlingTV For the event schedule, live results, teams and news visit www.worldcurling.org/wmxcc2017 Team Canada updates will be available at curling.ca.