Silver for Canada at World Mixed 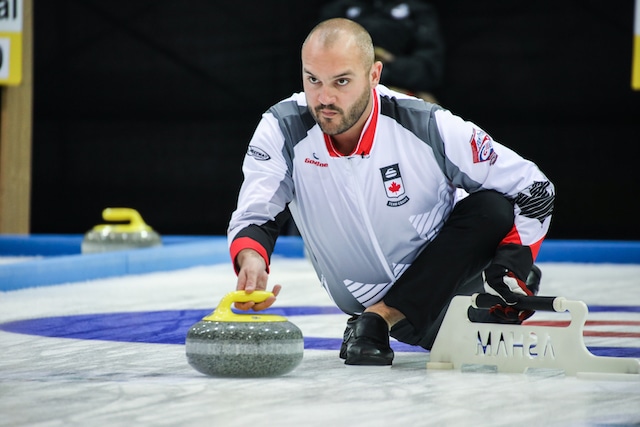 Canada trailed for much of the game, but battled back in the later ends. Trailing 5-2 in the seventh, Canada took advantage of a failed peel attempt by Scotland to set up a double takeout for the deuce and close the gap to 5-4. In the eighth, two perfect guards by lead Megan Carr allowed Canada to bury a rock on the back four-foot. With his last rock, Hardie missed a draw to the button, giving up the single to force the extra end. In the extra, with two Canadian rocks on the four foot, Hardie made the double takeout for the 8-5 victory to claim the gold medal for Scotland. “It’ll take a minute to settle in that it’s only silver because we came so close, but still very proud to take a medal home to Canada,” said Bonot after the medal ceremony. “We had the belief in our stones to fight back, the ice was a little different from what we had this morning, so we were just trying to get to grips with it. We missed a couple of opportunities early and didn’t capitalise.” “The whole week they played great, I’m very proud of the team,” he said. “It was a great run we had there. I can’t say enough about all of our fans who travelled with us, all of our family and friends, and everyone back in Thunder Bay and all of Canada. They were amazing.” Canada went undefeated throughout the round robin and playoffs and earned their spot in the final with a 5-3 win over Norway that came down to last rock. “It’s pretty amazing that we get to bring a medal home to Canada, regardless of its colour,” said Bonot after the semifinal. “We’re just very happy. With that final rock, I took some advice from old champions in Thunder Bay and they just told me to make sure to slow it down, bring it back to what you always do and don’t rush anything, so I remembered that, walked down to the hack slowly, double-checked the weight with the front end and just made it.” In the bronze medal game, Czech Republic’s Jaroslav Vedral defeated Norway’s Ingvild Skaga, 7-6. For the event information, visit www.worldcurling.org/wmxcc2017