An act of sportsmanship that highlighted the 2016 Tim Hortons Brier in Ottawa is being recognized by the International Fair Play Committee. 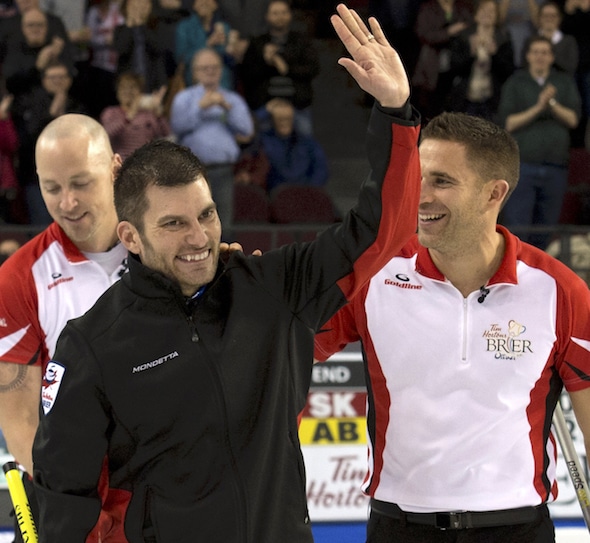 Craig Savill (with Nolan Thiessen and John Morris in the background) feels the love from the Ottawa crowd during the 2016 Tim Hortons Brier. (Photo, Curling Canada/Michael Burns)

Due to scheduling conflicts with the 2017-18 curling season, none of the three can attend the ceremony, but all were thrilled to be notified of the award, which recognizes their efforts during a late round-robin game in which Savill, who was undergoing a battle with cancer at the time, was able to participate in a Tim Hortons Brier game between Howard’s Ontario team and the Team Canada foursome skipped by Simmons.

“I still can’t say enough about Glenn, Pat and both their teams for giving me that opportunity to return to the ice in Ottawa,” said Savill. “It was a dream come true to play a Tim Hortons Brier in my hometown, and the fact that those teams recognized that, and put their rivalries aside to give me that chance, really shows what our sport is all about.”

You can watch the full game by CLICKING HERE; Savill’s on-ice appearance took place in the eighth end.

With joint headquarters in Budapest, Hungary, and Paris, the International Fair Play Committee was established in 1963, and the inaugural World Fair Play Awards Ceremony took place in 1965.

You can see the full list of past winners by CLICKING HERE.

It will be the first time curlers have been honoured by the International Fair Play Committee. 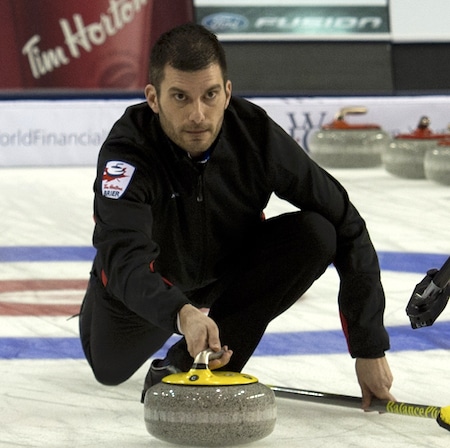 “Our sport always has been about respect for one another and fair play, and I consider that night in Ottawa to be one of the best highlights of my career,” said Howard, whose Etobicoke, Ont.-based team that evening was rounded out by Richard Hart, Adam Spencer and Scott Howard. “The end result of the game didn’t matter; it was a chance for all of us to show our respect and admiration for what Craig has done on and off the ice, and it was a thrill to be involved with it.”

“It’s one of my favourite things about curling,” added Simmons, whose Calgary team included John Morris, Carter Rycroft and Nolan Thiessen. “We’re competitors on the ice, but we never lose sight of the big picture, that there’s more to curling than just wins and losses. Seeing Craig throw those rocks that night gave all of us chills, and I’ll always cherish being a part of it.”

The International Fair Play Committee is recognized both by the International Olympic Committee and  the United Nations Educational, Scientific and Cultural Organization (UNESCO) for its efforts in raising awareness of fair play.

“As a community, curling in Canada has so much to be proud of, and having these players honoured in this way just speaks volumes about what our sport is about,” said Katherine Henderson, Chief Executive Officer of Curling Canada. “Craig, Glenn and Pat, and all of their teammates, provided a moment that shows our sport at its best, and all curlers can share in this because our sport has such high values of sportsmanship and fair play.”