Team Howard cruises to victory in Road to the Roar Opener

SUMMERSIDE, P.E.I. — Glenn Howard is taking a longer road to the Tim Hortons Roar of the Rings than he’s been used to, but he’s just fine with the prospect. 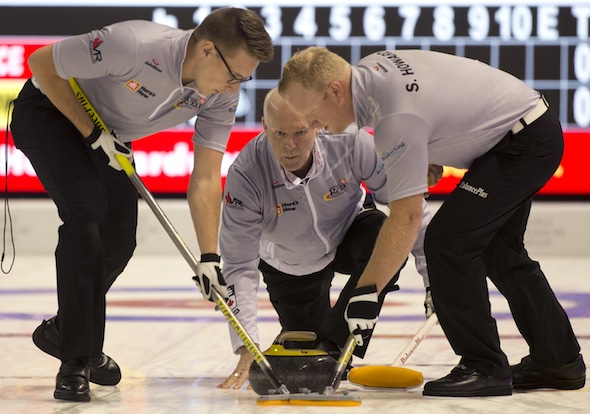 The 55-year-old four-time world champion didn’t quite make the cut for the Canadian Curling Trials, Dec. 2-10 in Ottawa, so he’s in Summerside this week, slugging it out at the 2017 Home Hardware Road to the Roar Pre-Trials, chasing one of the final two men’s berths into the Tim Hortons Roar of the Rings.

Howard, who lost the 2009 Tim Hortons Roar of the Rings final to Kevin Martin, opened the scoring with three in the second end and stole three more in the fourth and never looked back.

“I’ve been in this situation quite a bit in my career, as have my guys; it’s just one more level we have to get to to get to the Trials,” said Howard. “I really like the way the boys have been playing; we’re coming off two really great ’spiels and we had a solid game there.”

Howard had no reservations about being forced to the Pre-Trials after playing in every previous edition of the Tim Hortons Roar of the Rings — he even played in the 1987 Olympic qualifying event at Calgary.

“We weren’t good enough to get into the top seven (who qualified for the 2017 Tim Hortons Roar of the Rings), so we don’t deserve to be there,” shrugged Howard. “But we were good enough to get into the next level, and the good news is we have a chance — it’s all in our hands. We have to play very well because this is a great field, but we’re just where we want to be.”

Albeit with a slightly altered lineup than expected — Hart was hoping to play this season, but was forced to coaching duties in late September when his two bad knees couldn’t hold up to the rigours of competitive curling.

“He told me that the best he could do was two crutches,” said a laughing Howard. “I said, well, if you can hold the rock in your mouth, we’re good to go. But he was really disappointed. It wasn’t what we planned, but you deal with it. Thank goodness Adam is a super spare.”

Spencer has played plenty with Team Howard in the past, but always as a front-ender, so his move to vice-skip did require some getting used to.

“It is different in the house,” conceded Howard. “He’s completely different than Richie. Adam is working his way through it; in the first little while he didn’t want to be vocal, but I told him, ‘Adam, speak your mind. I trust what you say, I trust your opinion.’ And he doesn’t hold back now, which I love. We’ve gelled pretty well.”

Regardless of what unfolds over the next six weeks, Howard is headed to Pyeongchang, South Korea, for the 2018 Winter Olympics; he’s also coaching Eve Muirhead’s women’s team that will curl for Great Britain at the Five Ring Circus.

Which creates some potentially interesting scheduling issues, should Team Howard go all the way.

“It hasn’t even crossed my mind; that’s a long way away,” said Howard with a smile. “But if it comes to that? That’s a hell of a problem to have.”

In the other evening draw men’s game, John Morris (Vernon, B.C.) scored five in the fifth end thanks to a delicate hack-weight tap from last-rock thrower Jim Cotter and sailed to a 9-3 win over Jamie Murphy of Halifax.

In women’s games, Halifax’s Theresa Breen broke open a tight game with a deuce in the eighth end and a steal of three in the ninth in an 11-6 win over Tracy Fleury (Sudbury Ont.); and Jacqueline Harrison (Mississauga, Ont.) was a 10-6 winner over Winnipeg’s Briane Meilleur.