Team Breen off to hot start at Road to the Roar

SUMMERSIDE, P.E.I. — Theresa Breen’s team was the last to qualify, but it’s been first out of the gate to take the early lead at the 2017 Home Hardware Road to the Roar Pre-Trials. 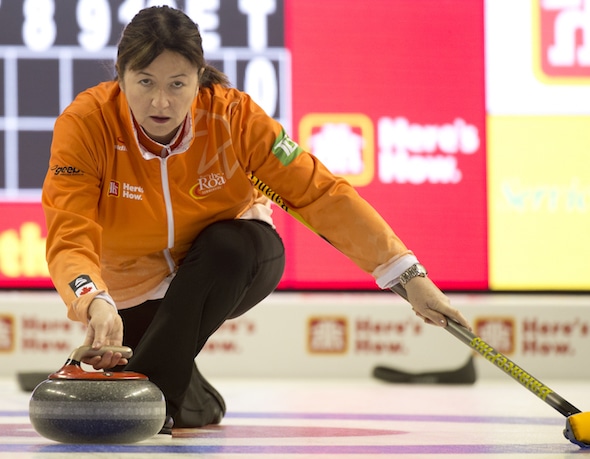 Theresa Breen and her Halifax team are off to a 2-0 start at the Home Hardware Road to the Roar. (Photo, Curling Canada/Michael Burns)

Breen’s team from Halifax — vice-skip Marlee Powers, second Jocelyn Adams, lead Amanda Simpson and coach Jeff Wilson — didn’t get the call to come to Summerside for the Pre-Trials until mid-July when Curling Canada expanded the men’s and women’s fields from 12 to 14 teams.

Already hard at work preparing for the 2017-18 season, Breen and Co. took it to another level of preparation and it’s paying off in the early stages of the 2017 Home Hardware Road to the Roar at Credit Union Place.

“It’s a great start; we’re certainly thrilled with how we’re playing so far,” said Breen, 51. “We’ve certainly built upon what we’ve started this season, and we worked hard to be here. It might be a surprise to some, but we’re feeling pretty confident about how well we’re playing.”

Breen opened play on Monday with an 11-6 takedown of Tracy Fleury of Sudbury, Ont., and didn’t let up on Tuesday, taking control with one in the third, a stolen point in the fourth and a stolen deuce in the fifth.

“I mean, we didn’t find out about (qualifying for the Home Hardware Road to the Roar) until July, but we had certainly already started preparing to have a solid season built, and then getting this wonderful opportunity, we cranked it up a notch,” said Breen. “We’ve been working really hard to perform well here.”

Breen is no stranger to big games; she’s a two-time silver medallist at the Scotties Tournament of Hearts (2000 and 1998) throwing third rocks with her longtime Ontario teammate Anne Merklinger, and also played in the 1997 Tim Hortons Roar of the Rings in Brandon, Man.

Her teammates, though, are less experienced; only Powers has played in a major national championship, and that was the CIS Canadian University Women’s Volleyball Championship as a member of the Dalhousie Tigers.

“For sure, it’s a young team, but three of us have played together for five years; we’ve lost a provincial final in Nova Scotia, so we’ve had some big-game experience trying to get to the Scotties,” said Breen. “Really, it’s just about taking it one shot at a time, relax, play your game, have your pre-shot routine ready to go, and enjoy the experience, for sure.”

The 2017 Home Hardware Road to the Roar continues on Tuesday with draws at 4 p.m. and 8 p.m. (all times Atlantic).