SUMMERSIDE, P.E.I. — Colton Flasch is relatively new to skipping, but he already knows one element of calling the shots and throwing last rock that he loves: the pressure. 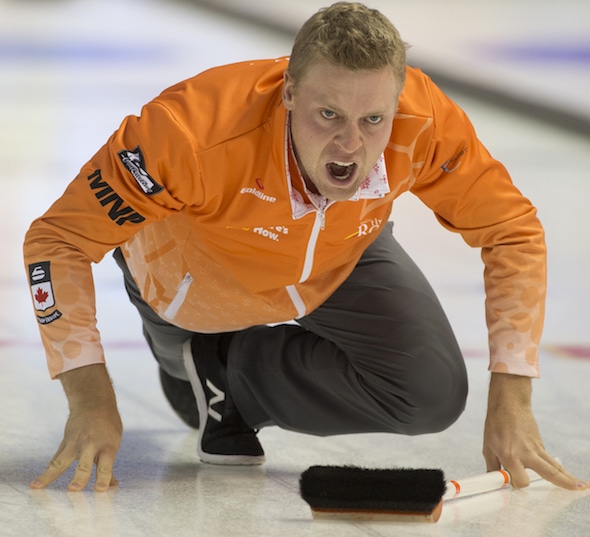 Colton Flasch had his game-face on as his team hit the win column by beating Team Morris on Wednesday afternoon. (Photo, Curling Canada/Michael Burns)

The 26-year-old Saskatoon resident delivered under pressure Wednesday afternoon at Credit Union Place, making a winning draw to bite the button in the 10th end to beat previously undefeated John Morris (2-1; Vernon, B.C.) 8-7 in round-robin play at the 2017 Home Hardware Road to the Roar Pre-Trials.

“Oh, that’s definitely the hardest one I’ve had to throw; based on the circumstances, this is way higher pressure than I’ve had (as a skip),” said Flasch. “If we don’t win that game? We’re hoping, praying. Gotta win three for sure, and then hope and pray. Now we’re totally in the mix. We just have to come out strong tonight (against Regina’s Adam Casey; 1-1), get another win. We control our own destiny at this point, which is perfect.”

Flasch had spent the previous six seasons as the burly, toe-sliding, hard-throwing second for Steve Laycock’s Saskatoon team, but struck out on his own and was picked up to skip Bruce Korte’s former team after Korte retired from competitive men’s curling this past off-season.

These days, Flasch is still a toe-slider, and can still throw hard (and, evidently, soft when he needs to), but he’s far less burly — there are 25 pounds less of him than last season, which may call into question his previously undisputed title as the arm-wrestling champ of the World Curling Tour.

“It’s partly because I’m not sweeping as much any more, and partly just because I wanted to lean down a bit for health reasons,” said Flasch, before adding with a laugh: “I can still out-arm-wrestle everyone here. The pipes are still fine.”

“That’s the fun part of skipping; that’s what I wanted to do when I left Team Laycock,” he said. “This is awesome. I love it; the more pressure, the better. It’s exactly what I want.”

It was an afternoon of all men’s games as all 14 women’s teams in Summerside enjoyed a bye.

In other games, Winnipeg’s Pat Simmons ended the unbeaten run of Jean-Michel Ménard (2-1; Saint-Romuald, Que.), scoring three in the 10th end, and then stealing the winning point in the 11th when Ménard was heavy on a draw for a 7-6 win. Team Simmons improved to 1-1 with the victory.

In other action, Edmonton’s Brendan Bottcher was a 7-6 winner over Dayna Deruelle of Brampton, Ont., leaving both teams with 1-2 records; and Greg Balsdon (1-1; Kingston, Ont.) stole two in the eighth end and one in the ninth in a 6-5 win over Winnipeg’s William Lyburn (1-2).

The Pre-Trials teamsare seeded one through 14 based on their 2016-17 CTRS rankings, and then split into two pools of seven for the round-robin competition.

The top three teams from each pool will advance to the playoffs beginning on Saturday, Nov. 11, with the first- and second-place teams crossing over to meet each other in the first round of the A-side. The winners will then meet for the first Tim Hortons Roar of the Rings berth.

NOTE TO EDITORS: Draw reports from the 2017 Home Hardware Road to the Roar will be sent out to media twice daily beginning on Tuesday. Other draw reports, including quotes, will be available at www.curling.ca/2017roadtotheroar/news/.