SUMMERSIDE, P.E.I. — Greg Balsdon has a unique bedtime experience that is helping him deal with the pressure of the 2017 Home Hardware Road to the Roar Pre-Trials. 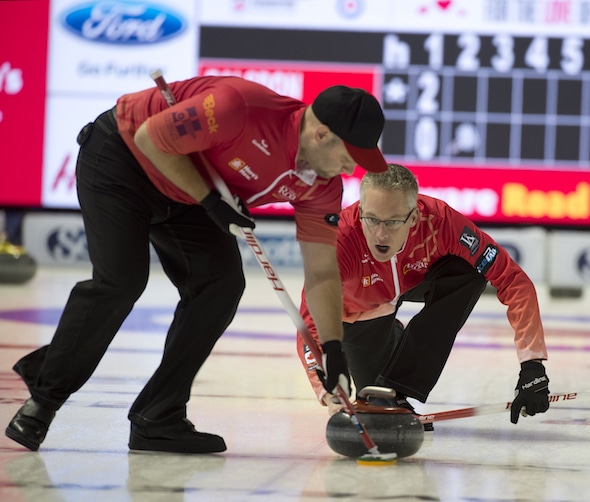 The team is staying at an Airbnb in the Summerside area that features a hot tub, a dog to play with, goats to pet, a horse, and, for Balsdon, a 15-foot climb up a ladder to his loft bedroom.

“I have to be very careful going up at night and coming down in the morning,” he said with a chuckle. “It’s a little precarious.”

It’s not exactly the standard two-queen-bed hotel setup that most of the teams at the Pre-Trials are using, but it seems to be working out quite nicely for Balsdon, vice-skip Don Bowser, second Jonathan Beuk, lead Scott Chadwick, alternate Robbie Doherty and coach Lauren Mann.

The Kingston, Ont., team improved to 2-1 on Thursday morning at Credit Union Place, shutting down Dayna Deruelle (1-3) of Sarnia, Ont., 10-7 to remain in contention for one of the three playoff berths out of Pool B.

Through 11 round-robin draws, only Charley Thomas of Edmonton (3-0) has a better record in Pool B.

“They’re all tough games, and we definitely have three tough games coming up, so going into them at 2-and-1 is definitely better than 1-and-2,” said Balsdon, 40.  “At the beginning of the week, we thought 4-and-2 would definitely get you at least a tiebreaker, so putting yourself at two losses with three games to go, your back is against the wall.”

Not that Team Balsdon needed any added pressure; there’s plenty to go around when the word “Olympics” is connected with an event.

“I haven’t touched a goat yet, but I’ve thrown the stick around with the dog; there’s a horse there, a rabbit, some chickens — it’s quite the farm,” he said. “For a city boy like myself, it’s definitely something out of the ordinary.”

In the other men’s game on Thursday morning, William Lyburn (2-2) drew for a single point in the 10th end for an 8-7 win over Pat Simmons (1-2) in an all-Winnipeg clash.

On the women’s side, Julie Tippin of Woodstock, Ont., took over sole possession of first place in Pool A at 3-1 with a dramatic 5-4 win over Edmonton’s Kelsey Rocque (2-2); Team Tippin stole single points in the ninth, 10th and 11th ends for the victory. Rocque’s last-rock attempt for the win in the 11th jamming and leaving Tippin with the winning point.

The comeback is complete! @TeamTippin steals points in the 9th, 10th and 11th ends for a 5-4 win over @Team_Rocque! Kelsey Rocque’s last rock needed to curl a little more to avoid the jam. #curling #RTTR2017 pic.twitter.com/FWZ34pUeDR

The 2017 Home Hardware Road to the Roar continues on Thursday with draws at noon, 4 p.m. and 8 p.m. (all times Atlantic).