SUMMERSIDE, P.E.I. — There have been a few highlights this week for Sherry Middaugh and her team from Coldwater, Ont., at the 2017 Home Hardware Road to the Roar Pre-Trials. 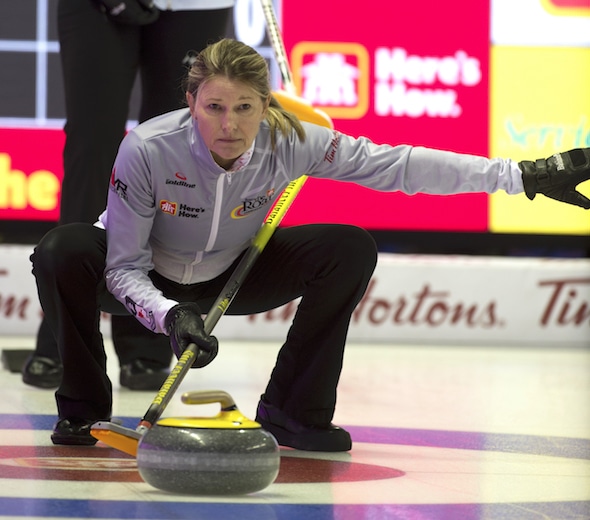 Sherry Middaugh and her team picked up another win on Thursday and are co-leaders in Pool B. (Photo, Curling Canada/Michael Burns)

Wednesday night? It was seafood pasta. Two nights ago, it was a lobster feast. Later tonight, it will be pork tenderloin. And, yes, when Middaugh, vice-skip Jo-Ann Rizzo, second Lee Merklinger, lead Leigh Armstrong, alternate Kim Tuck and coach Bob Turcotte are on the road together, chances are very good there will be a nice glass of wine or two enjoyed by all.

And, oh yes, the team is 3-1 and tied for first place in Pool B of the women’s competition heading into the final day of round-robin competition at Credit Union Place.

“We’ve actually had no evening games, which we love,” said a smiling Middaugh, moments after a dramatic 7-5 win over Krista McCarville (2-2 of Thunder Bay, Ont. “We rented a house a half hour away, and we’re comfortable. It’s perfect.”

Those evening dinners with friends, family and sponsors have been made better by the team’s success here — the lone blemish was a sloppy loss to Winnipeg’s Briane Meilleur on Tuesday, but Middaugh and Co. have put together two solid wins since then to sit in top spot, tied with Kerri Einarson of East St. Paul, Man.

“When we looked at the schedule, you want to get off to a good start; you don’t want to start dropping early. We won our first game, but lost our second, and worse, we didn’t play well. We were really flat, and that’s the scary part,” said Middaugh. “If you play well and lose, you think, well, not a big deal, right? One or two shots. So, it was big for us to come out strong yesterday, which we did, and we came out strong again today. I felt like we’re playing well, we’re reading the ice really well. It’s important that we’re 3-and-1, but we still have two really good matches tomorrow.”

It was a crucial game for both teams on Thursday, and it went down to the wire. A rare miss from Middaugh in the ninth, when she was wide on a takeout attempt, opened the door for McCarville to hit for three and take a 5-4 lead into the 10th end.

But McCarville returned the favour in the 10th, coming up heavy on a draw attempt, giving Middaugh an open hit for the victory.

It’s an open hit for the victory and Sherry is all over it to score 3! A 7-5 win for @slider1_ over @TeamMcCarville #curling #RTTR2017 pic.twitter.com/FfaPmagOod

The top three teams from each pool will advance to the playoffs beginning on Saturday, with the first- and second-place teams crossing over to meet each other in the first round of the A-side. The winners will then meet for the first available 2017 Tim Hortons Roar of the Rings berth.

“It’s nice to be here, knowing that with one or two wins tomorrow, we’re playoff-bound,” said Middaugh. “But it’s important, as you know, to get into the one-two spot.

Einarson, meanwhile, rebounded nicely after taking her first loss on Wednesday; she scored threes in the fourth and sixth ends and cruised to a 9-4 win over Jacqueline Harrison (2-2) of Mississauga, Ont. Einarson and Middaugh will meet on Friday morning (8 a.m. AT), with a win all but locking up first place in the pool.

In other action, Team Meilleur kept pace in Pool B with Middaugh and Einarson, improving to 3-2 with a 10-6 win over Winnipeg’s Darcy Robertson (1-4).

In the lone Pool A game, Halifax’s Theresa Breen (3-2) boosted her playoff hopes with a 6-4 win over Winnipeg’s Shannon Birchard (2-3). Team Breen is in second place in Pool A, behind only Julie Tippin (3-1) of Woodstock, Ont.

The 14 men’s teams had byes in the afternoon draw.