SUMMERSIDE, P.E.I. — There wasn’t any in-depth analysis required for Kelsey Rocque and her Edmonton team heading into the final day of round-robin play at the 2017 Home Hardware Road to the Roar Pre-Trials. 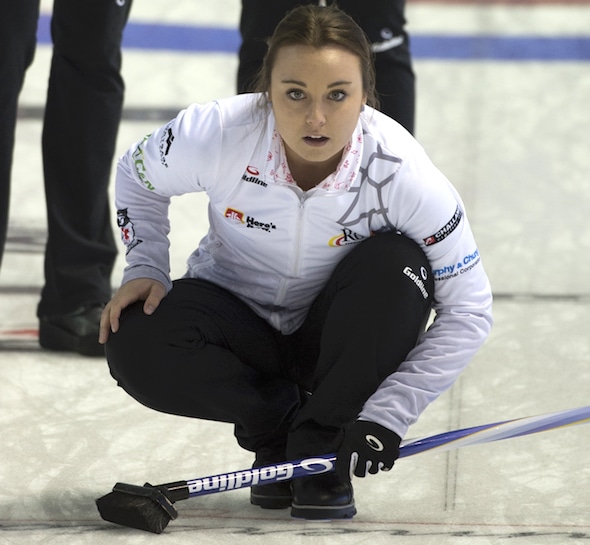 And that’s exactly what happened Friday afternoon at Credit Union Place — a 7-2 win over Shannon Kleibrink of Okotoks, Alta., completed round-robin play for Rocque, third Laura Crocker, second Taylor McDonald, lead Jen Gates and coach Lesley McEwan and put them in what’s looking to be a mess of tiebreakers in Pool A.

But the fact that Team Rocque is even in the conversation is good news, said the 23-year-old skip

“We had a rough couple games and definitely knew what we had to do today,” said Rocque, a two-time world junior women’s champ who also won Winter Universiade gold earlier this year in Kazakhstan. “We came out and played really well as a team. It feels really good to do that.”

The result left Teams Rocque and Kleibrink with 3-3 records; three sheets over, Winnipeg’s Shannon Birchard scored two in the 10th end for a 6-5 win over Calgary’s Nadine Scotland, leaving both of THOSE teams with 3-3 records, and Theresa Breen finished round-robin play late Thursday, ALSO with a 3-3 record.

It’s a runback takeout for Shannon Kleibrink but it’s not quite on target and it results in a steal of 2 for @Team_Rocque and a 5-0 lead at the 5th-end break. #curling #RTTR2017 pic.twitter.com/LPKJLmupJ7

One final Pool A game is scheduled for later  Friday with Julie Tippin (3-2; Woodstock, Ont.) taking on Tracy Fleury (2-3; Sudbury, Ont.). A Fleury victory would mean all seven teams in Pool A finish with 3-3 records, bringing numerous tiebreaker scenarios into play involving head-to-head results and last-shot draw distances. The scheduling can’t be determined until men’s play is completed late Friday night, and ice availability is known.

The top three teams from each pool will advance to the playoffs beginning on Saturday, with the first- and second-place teams crossing over to meet each other in the first round of the A-side. The winners will then meet for the first 2017 Tim Hortons Roar of the Rings berth.

Rocque took control against Kleibrink by taking a single in the second, and then stealing singles in the third and fourth ends, two in the fifth and one more in the sixth.

It was a brilliant way to respond after an agonizing loss to Tippin on Thursday morning when the Ontario team stole points in the ninth, 10th and 11th ends for the win.

“You know what? This is a really deep field, and we knew we had to play our best, and we weren’t, unfortunately,” said Rocque. “There was a game where I had a couple of chances to close it out and I kind of let our team down, so to come out and play a strong game today was our major goal. We knew it was still in our hands and we just had to play well to give ourselves a chance.”

Despite her rich international experience, Rocque said the Home Hardware Road to the Roar is another level of pressure.

“To be honest with you, I don’t know if I’ve played in an event that has this much at stake — to me, anyways,” she said. “I’ve never played in anything to play down for the Olympics. I’ve been in the world juniors, but the Olympics are the pinnacle of the sport, right? But I think we’ve been handling the pressure really well, and that showed today with how we played.”

Birchard got her winning deuce in the 10th end against Scotland when the Calgarian was light with her last-shot draw attempt.

In men’s play, meanwhile, Edmonton’s Charley Thomas suffered a pair of losses on Friday; first, his second Brandon Klassen bowed out of the event due to an illness, leaving Thomas with just three players for his Draw 16 assignment against Greg Balsdon of Kingston, Ont. Nathan Connolly, who played third for Thomas the past two seasons before deciding to scale back his competitive curling career, arrived in Summerside on Friday afternoon and will be in the lineup for Team Thomas’s round-robin finale on Friday night.

Against Balsdon, Thomas’s short-staffed team surrendered four in the first end before going down to a 7-2 defeat. Thomas dropped to 4-1 while Balsdon improved to 3-2, still alive for a tiebreaker.

Bottcher kept his playoff hopes alive with his third straight win; he tied the game against Winnipeg’s Pat Simmons (1-4) with two in the 10th, and then stole one in the 11th when Simmons was just heavy with his last-rock draw.

Pat Simmons had a draw for the win in the 11th but was just heavy, and it’s a stolen victory 6-5 victory for @TeamBottcher #curling #RTTR2017 pic.twitter.com/jbgcdFGJzu

In the other men’s game, Dayna Deruelle (2-3; Brampton, Ont.) stayed in the hunt for a tiebreaker berth with a 9-6 win over Jean-Michel Ménard (2-4; Saint-Romuald, Que.); Deruelle stole three in the 10th end for the win.