SUMMERSIDE, P.E.I. — It took them until the final game of the final qualifying event, but Brendan Bottcher and his Edmonton team can finally start planning for a trip to Ottawa for the 2017 Tim Hortons Roar of the Rings. 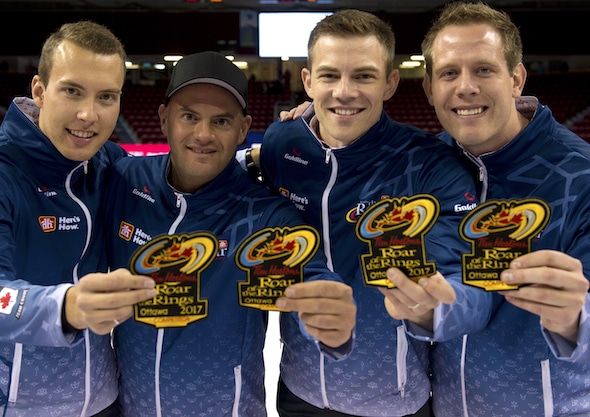 Bottcher, backed up by third Darren Moulding, second Brad Thiessen and lead Karrick Martin, rolled to a 9-5 win over Glenn Howard of Etobicoke, Ont., Sunday night at Credit Union Place in the men’s B-side final of the 2017 Home Hardware Road to the Roar Pre-Trials.

The win clinched the final men’s berth into the Tim Hortons Roar of the Rings, Dec. 2-10 in Ottawa, where Canada’s four-player curling teams for the 2018 Winter Olympics in Pyeongchang, South Korea, will be decided.

“Amazing,” marvelled the 25-year-old Bottcher, who’s just five years removed from winning the 2012 World Junior Championship. “We came into this game and tried to lower our expectations a little bit, and just go out there and play well. That was the goal. But when you win, and now you’re in the Trials and all that comes with it? It’s huge, it’s huge.”

Team Howard lost just twice during the Pre-Trials, but both losses came to Team Bottcher — in the A-side semifinals on Saturday, and again Sunday night with the Trials berth on the line.

“They had a great week, and that means a lot,” said Bottcher. “I think I saw on TV that he’d been to six Roar of the Rings in a row. He’s been going to the Trials since before I was alive; out of anyone in this competition, he was the guy who was most prepared to win today, and I’m just really proud of the guys. They came out and played really well for me and gave me a chance.”

They did indeed; after holding Howard to a single in the first, it was Bottcher’s team that controlled much of the remainder of the game, with the exception of the eighth end when Howard was able to steal a point to go up 5-4.

But Bottcher came straight back to retake the lead with two in the ninth, and put the game away with a steal of three in the 10th when Howard couldn’t pull off a long raise to salvage a single point and force an extra end.

“It’s huge for all of us to get (to the Trials), to experience it, and we’re coming in as the huge underdogs, which I think frees us up a little bit to just go out there and play well again,” said Bottcher. “There’s zero expectation of how we’re going to do there. So I’m just looking forward to being there, enjoying it all and hopefully getting all the experience we can.

“I expect that we can win it; I don’t think anyone else expects that we can win it, and I think that’s big for us. I believe we’re ready. We’ve played all these teams before; we’ve played them in huge events. Everyone else is going out there with so much riding on it. It’s not that that isn’t the case for us; I just think we can maybe have a little bit freer mind-set, that we can go out there and just focus on playing well.”