Quebec’s Robert Desjardins finished the round robin with a perfect 6-0 record and will lead the way into the Championship round of the 2018 Canadian Mixed Curling Championship in Swan River, Man. 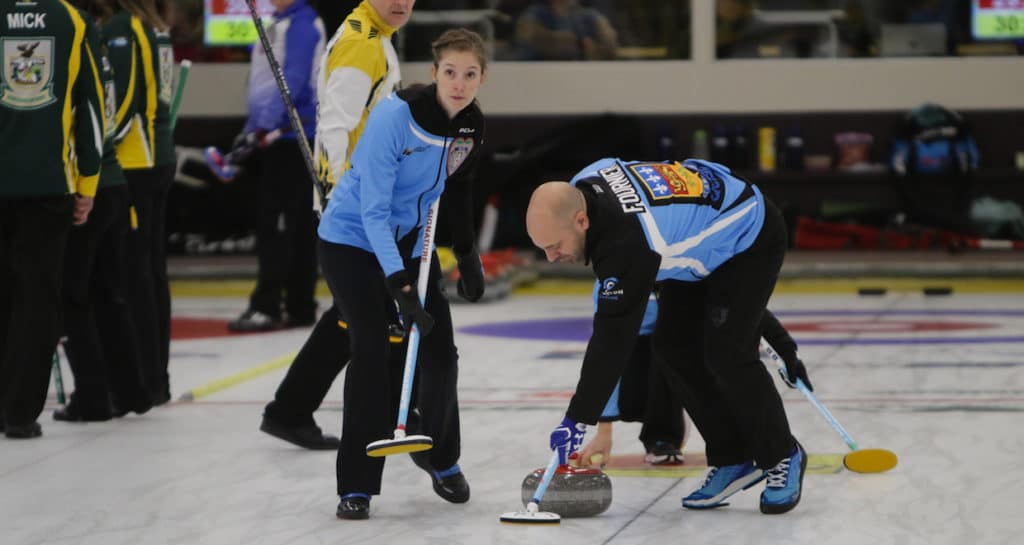 Joining Quebec in the Championship Pool are Ontario’s Mike Anderson and New Brunswick’s Charlie Sullivan with 5-1 records, followed by Chris Ford (NL), Brent MacDougall (NS) and Jamie Koe (NT) with 4-2 records, and Warren Cross (AB) and Charlie Robert (NO) at 3-3. The rest of the field moves into the Seeding Pool to determine positions for next year’s championship. Wednesday was the final day of round robin play, wrapping up with Draw 9, which cemented the final standings. Draw 9 There was a loud moan from the crowd in the second end as spectators looked over to see six Alberta stones in the rings – a steal, putting Manitoba down 8-0 after two. Alberta kept it clean after that to secure the 12-2 win from the local favourite. The live-streamed game between Nova Scotia (3-2) and Northern Ontario (3-2) became an unexpected, one-sided affair as Nova Scotia took a 6-0 lead after five and hung on for a 7-2 win. The winless PEI team took on Ontario who came into the final game on a roll with a 4-1 record. Ontario controlled each end and after going up five, kept the front clear. Skip Dennis Watts of PEI made timely draws and freezes to salvage the third and fifth ends, but it wasn’t enough to pull ahead and the game ended with a 7-3 Ontario victory. Undefeated Quebec overwhelmed Saskatchewan (3-2) with their big-weight takeout and peeling expertise. Although the game went eight ends, Quebec rarely let Bruce Korte’s SK team into the 5-1 game. The BC (3-2) versus New Brunswick (4-1) game had decidedly open play throughout the first six ends. Needing a steal of two for the win or a single in the final end, BC attempted to create clutter in front. But New Brunswick’s Charlie Sullivan nosed his takeout on last shot to take the end and game 5-3. 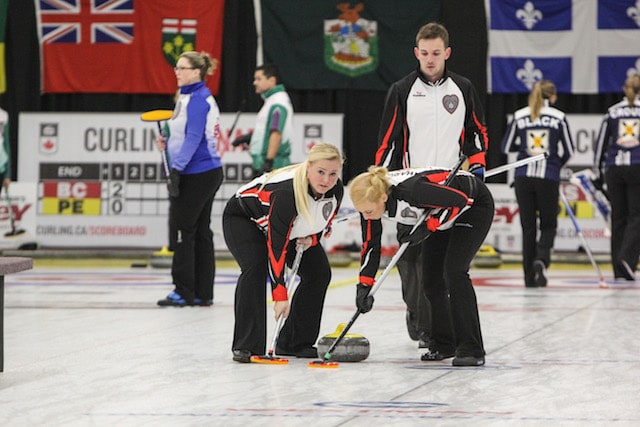 Championship and Seeding Pools At the conclusion of the round robin, the top four teams in each pool advance to the Championship Pool, when the teams play the teams from the opposite pool, carrying forward their full win-loss records. Meanwhile, the bottom three teams in each pool will go to the Seeding Pool, where they will compete against the three teams from the opposite pool. These teams also carry forward their full win-loss records. The Championship Pool concludes on Friday and will be followed by two semifinals Saturday, Nov. 18 at 10 a.m. (all times Central), pitting 1 vs 4 and 2 vs 3. The two winners then advance to the gold-medal final Saturday afternoon at 3 p.m. while the two losing teams meet in the bronze medal game at the same time. Final results will determine seeding for next year’s Canadian Mixed, at a site/date to be announced by Curling Canada. Live-streaming coverage of each event will be made available at cbcsports.ca and via the CBC Sports app for iOS and Android devices, with select coverage available via broadcast on CBC. CBC Sports’ broadcast and streaming schedules are posted here. As well, fans can set up calendar alerts to notify them of CBC Sports’ streaming coverage here and can follow the latest news from the curling world on the dedicated curling page at cbcsports.ca. For event, team and draw information, visit www.curling.ca/2018mixed. Draw scores/standings will be immediately available on Curling Canada’s scoring website. (Report by Mark Inglis)