Quebec’s Robert Desjardins and his Chicoutimi-based team have one more task in front of them to complete a perfect week at the 2018 Canadian Mixed Curling Championship, presented by Westman Communications Group. 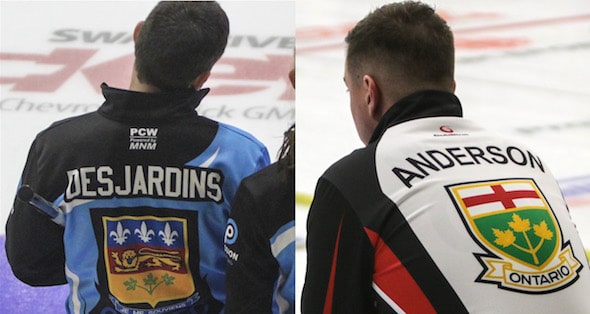 The gold-medal and bronze-medal games are set for 3 p.m. CST, with the gold-medal game being streamed live on cbcsports.ca, and via the CBC Sports app for iOS and Android devices.

It was an 11th straight win for the Quebec foursome, which is seeking that province’s second Canadian mixed championship, and first since Jean-Michel Ménard prevailed in 2001 at Weyburn, Sask.

Meanwhile, Anderson, backed up by vice-skip Danielle Inglis, second Sean Harrison and lead Lauren Harrison, gave up a deuce to New Brunswick in the eighth but buckled down to take the winning point in nine.

Interestingly, Quebec and Ontario (10-1) met in their respective round-robin finales on Friday night, with Quebec eking out a 5-4 triumph to seal first place in the round robin.

Ontario is looking for its fourth Canadian Mixed gold medal; previously, Cory Heggestad won in 2013 at Mount Royal, Que.; John Epping won in 2006 at Whitehorse; and in 1986 at Kamloops, B.C., it was Dave Van Dine coming out on top.

Live scoring for the final is available at www.curling.ca/scoreboard/#!/competitions/2437