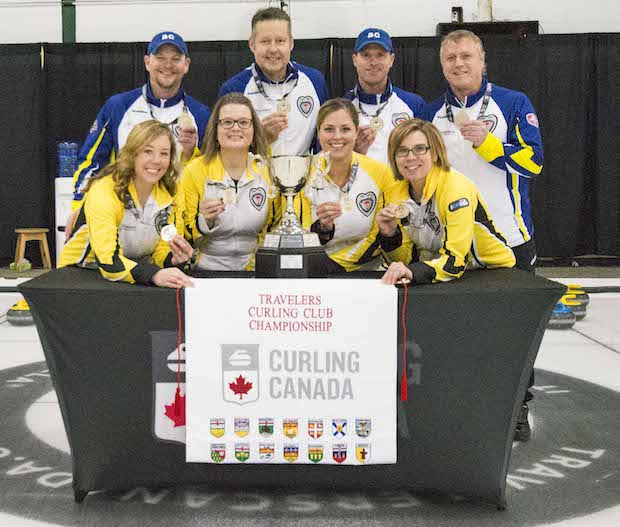 Skip Stacey Fordyce, third Christy Erickson, second Stacey Irwin and lead Pam Gouldie controlled their gold medal final from the first end against Nanette Dupont’s team from Alberta through to the last rock. The team from Brandon stole two points in the second end to go up 4-0 on the team from Lethbridge and never looked back, stealing another five points in the fifth end before handshakes when the final reached 11-3 after six ends. This is the second national title for Fordyce and team at this event, having won the 2013 championship in Thunder Bay. “It feels just as special. We worked so hard to just make it here to Kingston and to come home with a medal that is golden is amazing,” Fordyce said inside the Cataraqui Golf and Country Club. “Club curling is so strong in Manitoba and so is elite level curling but we’re really noticing that the women’s club level play is growing and to have this Travelers championship to compete in means so much to us,” she added before being named Most Valuable Player for the women’s event. The award was chosen by the Curling Canada umpires. The Cataraqui Golf and Country club hosted the 9th year of the Travelers Curling Club Championship and Fordyce commended the volunteers and members for a first class experience. “We’ve been treated like royalty. Our team ambassadors, our drivers and all of the volunteers and the side events have been so memorable.” British Columbia’s Bart Sawyer was named Most Valuable Player for the men. The B.C skip broke his gold medal final wide open in the third end with a big score of five points against Manitoba’s Mark Anderson. B.C. was trailing 1-0 when Sawyer attempted a split for six but missed. It was still enough to take full control of the game. B.C. went on to win the final 7-3. This was the first national event for Sawyer, third Steve Waatainen, second Craig Burton and lead Keith Clarke. The team from the Nanaimo Curling Centre lost only one game all week. “To be able to win a national championship or even to have one we can compete in with my parents watching in the stands is pretty special. There aren’t words to describe this right now,” Sawyer, 43, said in Kingston. Sawyer spoke highly of his competitors both in the final and across the other sheets of play. The men’s bronze medal game between Newfoundland and Labrador and Alberta paused their game to congratulate the gold and silver medalists as it wrapped up on the neighbouring sheet. “That’s something you don’t see in a lot of other sports and even in some other curling events. We can’t say enough about the other guys we met and chatted with this week,” Sawyer added. The team from the Riverview Curling Club in Brandon of Anderson, third Jeremy Short, second Bryce Granger and lead Riley Willows leave Kingston with silver medals. In the women’s bronze medal game it was host Ontario who slid past Nova Scotia. The team from the High Park Curling Club in Toronto climbed the podium in Kingston thanks to a 10-3 win on Saturday morning. This was skip Jodi McCutcheon’s second medal at the Travelers Championship, having won silver in 2011. The men’s bronze medal game was won by Alberta’s John Mryglod who defeated the 2015 men’s Canadian champions from Newfoundland and Labrador by a score of 10-4 in seven ends. Sportsmanship awards were handed out after the medal games on Saturday to both men’s and women’s players for each position. The awards were chosen by a vote from their fellow competitors. For the women the winners were lead Kristy Bird of Saskatchewan, second Nichole Dubuc-Charbonneau of Northern Ontario, third Krista Wesley of Northwest Territories and skip Wendy Dunne of Newfoundland and Labrador. Winners of the men’s sportsmanship awards were lead Clayton Pielak of Northwest Territories, second Christian Bilodeau of Quebec, third Eiryn Devereaux and skip Leo Stewart. Fourteen women’s teams and 14 men’s team from each of Curling Canada’s Member Associations were represented in Kingston for the week long event. The 9th annual event featured the best curling club champions in both genders split into two pools. At the completion of the split round robins the top team was placed into the semi final, while the second and third place teams played off in crossover quarterfinals. Each team was allowed only one player who had played in a provincial/territorial Juniors’, Men’s (Brier), Women’s (Scotties) or Seniors’ championship in the current or previous four curling seasons, or participated in a full-field Grand Slam event in the current or previous four curling seasons. As well, no player on the teams could have played in a Canadian Juniors, Men’s, Women’s or Seniors national championship in the current or previous four seasons.