OTTAWA – Chelsea Carey is a sports nut. Doesn’t matter if it’s pro or amateur she follows it. So she is the first to realize the significance of the enviable position she’s in now, and that’s one win from playing in the 2018 Winter Olympic Games in Pyeongchang, South Korea. 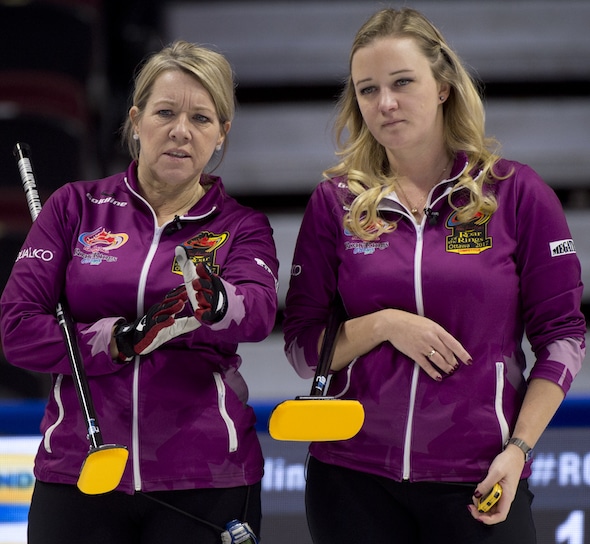 Cathy Overton-Clapham, left, and Chelsea Carey are one victory away from a trip to the Winter Olympics in Pyeongchang, South Korea. (Photo, Curling Canada/Michael Burns)

Team Carey with third Cathy Overton-Clapham, second Jocelyn Peterman, lead Laine Peters and coach Helen Radford, defeated Krista McCarville of Thunder Bay, Ont., 5-2 Friday morning to run their nine-team, round-robin record to 7-0. More importantly, it clinched first place and a spot in Sunday’s women’s final (2 p.m.). “It’s hard to wrap my head around it, we still have another game to play (against Michelle Englot of Winnipeg, who is 2-5) right away here so we’re not quite in that mode yet,” said Carey, when asked about being a win away from going to the Olympics. “When we won the Scotties (in 2016) we won the 1-2 (Page playoff) game and had the whole day off (before the final), so we’ve done that, been there. So we feel OK about that. All you can ask for is to be in (the final). That’s all anyone wants all week. “If you’re not in that game, you’re not going to the Olympics, so that’s what everyone’s been looking for all week.” Carey said she isn’t nervous about the final. Yet. “I’m sure there will be over the next couple of days. I still have to go curl, so I’m not thinking about that stuff yet,” said Carey. “I’ve always been a big believer there’s been a lot of destiny involved in an event like this so for me my job is to prepare for as much as I can. And we’ve all done that. “You come out in the final and allow your training to come out in the final and just hope it’s your day.” The loss does not eliminate McCarville from the playoff picture. But she does need to beat Edmonton’s Val Sweeting (3-4) this afternoon and have Ottawa’s Rachel Homan (6-1) defeat Jennifer Jones of Winnipeg (5-2) to force a tiebreaker between McCarville and Jones on Saturday (9 a.m.). Homan, however, has already wrapped up a spot in Saturday’s semifinal (2 p.m.) no matter the outcome of tonight’s game. If McCarville loses, Jones will advance to the semifinal. “We have to, we don’t have a choice. We kind of have to let it go and just go out and play our game and play like we have been playing,” said McCarville of having to play so soon after the morning loss. In the other game on the women’s draw, Julie Tippin of Woodstock, Ont., edged Casey Scheidegger 7-6 to improve to 2-5 while Scheidegger finishes the round robin 3-5.

On the men’s side, Mike McEwen kept his team’s gold medal dream alive by defeating Brendan Bottcher of Edmonton 6-4. McEwen over a 4-2 deficit with three in the eighth end thanks to a sweet freeze by third B.J. Neufeld, and then stole another point in the ninth for insurance. The victory ended a three-game winless streak and means McEwen has clinched at least a tiebreaker position. If Reid Carruthers beats Bottcher on tonight’s final round-robin draw, the two Winnipeg teams will play each other Saturday (9 a.m.) to determine who advances to the semifinal against Brad Gushue of St. John’s. If Bottcher wins, then it will be McEwen moving on to the semi. “Geez, they were almost flawless for the first seven (ends), and then B.J. made an absolute pistol of a freeze to set up a tough one for Brendan, and then finally he didn’t throw one quite like he wanted to and we snagged that three,” said McEwen, who was supported not only by Neufeld but by second Matt Wozniak, lead Denni Neufeld and coach Chris Neufeld as well. “But, man, they were as good as a team could be for the first seven, but we hung in there.” In other men’s action, John Morris of Vernon, B.C., (2-5) nipped John Epping of Toronto (1-6) in an extra end. The 2017 Tim Hortons Roar of the Rings continues with draws today at 2 p.m. and 7 p.m. (all times EST). Live scoring, standings and statistics for the 2017 Tim Hortons Roar of the Rings are available at www.curling.ca/scoreboard/ TSN/TSN2 and RDS2 will provide complete coverage of the Tim Hortons Roar of the Rings. CLICK HERE for the complete schedule For ticket information for the 2017 Tim Hortons Roar of the Rings, CLICK HERE. This story will be posted in French as soon as possible at www.curling.ca/2017roaroftherings/?lang=fr