A chance to make curling history will be on the line when the inaugural Canad Inns Canadian Mixed Doubles Curling Trials get underway Tuesday in Portage la Prairie, Man. 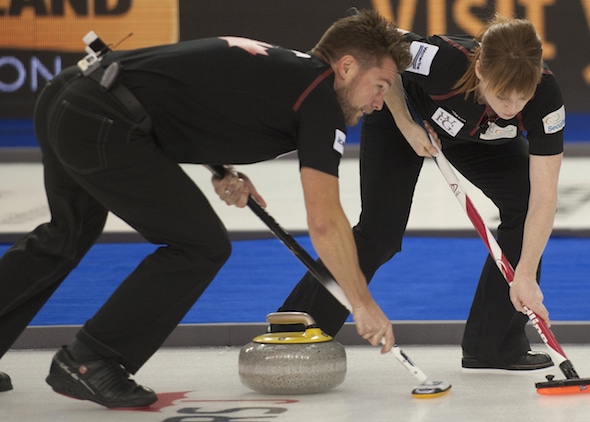 Mike and Dawn McEwen are among the 18 teams playing for the right to represent Canada at the 2018 Winter Olympics. (Photo, Curling Canada/Michael Burns)

The event, scheduled for Jan. 2-7 at Stride Place, will determine Canada’s first Olympic mixed doubles curling team, after the event was declared an official Winter Olympic medal sport by the International Olympic Committee in 2015.

And considering the level of talent that will be on display in Portage, it’s not a stretch to say that the 2018 Canad Inns Mixed Doubles Curling Trials will be the most competitive mixed doubles competition ever staged.

Eighteen teams, including numerous Olympic, World and Canadian champions, will gather in Portage for the seven-day competition, which will feature six draws daily at Stride Place Tuesday through Thursday, with tiebreakers, if necessary, and the opening round of the eight-team playoffs set for Friday.

The teams are split into two nine-team pools, with seedings based on the Canadian Mixed Doubles Rankings. The teams will play a single round-robin within their pools, before eight teams (first and second in each pool, and the next four best win-loss records) move onto the playoffs.

CLICK HERE to see the full list of teams and the complete event schedule. CLICK HERE to view the practice schedule for Jan. 1 at Stride Place.

The winning team, accompanied by national mixed doubles coach Jeff Stoughton of Winnipeg, will join Canada’s four-player teams (skipped by Rachel Homan and Kevin Koe) at the 2018 Winter Olympic Games in Pyeongchang, South Korea, scheduled for Feb. 9-25. Mixed doubles curling, featuring eight countries, will actually get underway the day before the Opening Ceremonies, on Feb. 8, and will conclude with the gold- and bronze-medal games on Feb. 13.

Canada will enter the inaugural Olympic mixed doubles competition as the top-ranked country in the world in the discipline.