Martin/Schneider come back to stay atop Pool A

PORTAGE LA PRAIRIE, Man. — No lead is safe in mixed doubles curling and that was evident during Draw 7 action at the 2018 Canad Inns Canadian Mixed Doubles Trials. After giving up four points in the first three ends, Nancy Martin (Saskatoon) and Catlin Schneider (Regina) defeated Emilie and Robert Desjardins (Chicoutimi, Que.) 7-6. Team Desjardins started the game with last rock and set up a deuce, followed by a steal of one in the second end for a 3-0 lead. Martin faced three on her last shot in the third end and was outside on her hit. It gave Robert and Emilie Desjardins another point and a 4-0 lead. But Nancy and Catlin started figuring out the ice and began taking advantage of some key Desjardins misses. “Later in the game we started to get our draw weight down a little better. It was a litte straighter today so it took us a little bit of time to see how the rocks were coming into the house. We stuck with it and we out-curled them late and that’s kind of what you have to do to make the last one,” said Schneider. The Desjardins team missed an opportunity to score two in the fifth and settled for one point and a 5-2 lead. Martin/Schneider went on the power play in the sixth end and picked up a deuce that decreased the lead to 5-4. Emilie and Robert used their power play in the sixth end, but couldn’t muster more than a single point. They took a 6-4 lead into the final end, but gave up the hammer. It set up Martin with a draw for three to win the game in the eighth. Martin and Robert Desjardins have some history when it comes to mixed doubles curling. They played against each other in the inaugural national mixed doubles championship final in 2013. But while Desjardins defeated her back then, Martin picks up the win that puts her team at 3-1 and maintains playoff position within Pool A. “We were hoping for at least two wins the first day and this win helps us get to a position where playoffs are looking good. So we’ll just keep plugging away and make our shots,” said Martin. Martin and Schneider were not the only team to overcome adversity during Draw 7. Dawn and Mike McEwen gave up five points against Jill Officer and Reid Carruthers and trailed 6-2. The McEwen team battled back into the game and played a textbook eighth end, which allowed Dawn to make a draw for one and the win. 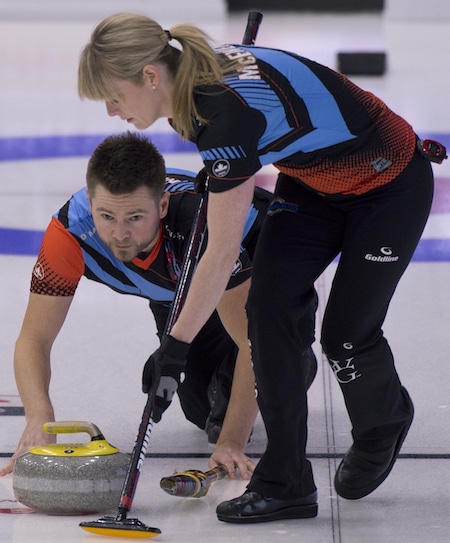 Mike McEwen and wife Dawn McEwen evened their record at 2-2 with a win on Wednesday morning. (Photo, Curling Canada/Michael Burns)