LONDON, Ont. — Reigning World women’s and men’s champions Rachel Homan and Brad Gushue will kick off and end the day respectively on the opening day of the 2018 World Financial Group Continental Cup, presented by Service Experts. 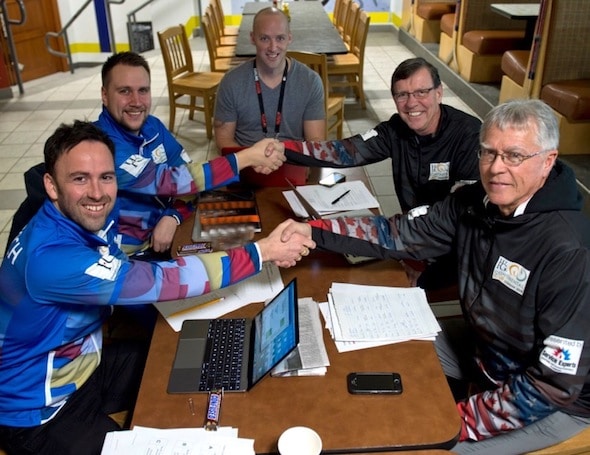 Homan’s Ottawa team, which will represent Canada at the Winter Olympics next month in South Korea, will be in the opening draw Thursday morning at The Sports Centre at Western Fair District, representing Team North America in a battle against Team World’s Silvana Tirinzoni of Switzerland at 9:30 a.m. (all times Eastern).

Gushue and his St. John’s team, meanwhile, will be in the evening draw at 7 p.m., taking on Team World’s Peter De Cruz, also of Switzerland.

The captains and coaches for both teams — Coach Rick Lang and Captain Al Hackner for Team North America; Coach Fredrik Lindberg and Captain David Murdoch for Team World — determined their lineups on Wednesday for the first three days of competition in curling’s version of the Ryder Cup. Those three days will feature three rounds of mixed doubles competition, as well as six rounds of traditional four-player team competition. The lineups for Sunday’s two rounds of skins competition will be set on Saturday afternoon.

The mixed doubles draws are at 2:30 p.m. on Thursday and Friday, and 9:30 a.m. on Saturday. The Saturday draw will see teams switched after four ends, as the 12 remaining players for each team who haven’t played mixed doubles will get in the ice for the final four ends.

The unique format pits Team North America against Team World in various disciplines during four days of competition — traditional team games, mixed doubles, mixed skins and standard skins games. Each segment awards points for wins (or ties). A total of 60 points are available, meaning the side that earns more than 30 points will be declared the champion.

There will be 18 team games (nine men’s and nine women’s) played, each worth one point for a win and a half-point for a tie.

For the first six mixed doubles matches, one point will be awarded for each victory, one-half point if tied. Those totals will be doubled for the 9 a.m. draw on Saturday.

All games are eight ends and there are no extra ends.  There will also be six skins games (those matchups will be decided on Saturday), with each game worth a total of five points to the winner.

A small block of new tickets for the 2018 World Financial Group Continental Cup has just been released; go to www.curling.ca/2018continentalcup/tickets/ for more information.

TSN (RDS2 in French), the exclusive television network for the Curling Canada’s Season of Champions, will provide complete coverage of the World Financial Group Continental Cup. As well, games will be streamed live in the U.S. on ESPN3. Go to www.tsn.ca/2017-18-curling-broadcast-schedule-1.593081 for the TSN broadcast schedule.