LONDON, Ont. — For a World Financial Group Continental Cup rookie, Silvana Tirinzoni and her Swiss team hardly looked out of place on Thursday morning at The Sports Centre at Western Fair District. 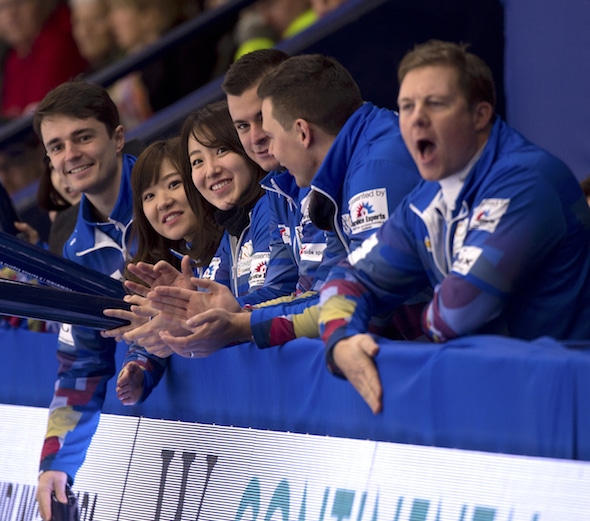 Tirinzoni, backed up by vice-skip Manuela Siegrist, second Esther Neuenschwander and lead Marlene Albrecht, raced to a big early lead against Team North America’s Rachel Homan (Ottawa) and sailed home to a 9-3 victory in a battle of Winter Olympics-bound teams.

It was one of two Team World victories in the opening draw of the 2018 World Financial Group Continental Cup, presented by Service Experts, while Team North America prevailed in the other, giving Team World two of the possible three available points in the traditional team games.

A total of 60 points are available over the four days of competition, which features traditional team games, mixed doubles games and skins games, with the first team to reach 30.5 points declared the winner.

Tirinzoni took three in the first end and stole two more in the second against Homan, who struggled early with draw weight.

That was all the Swiss needed, and one could make an argument that a message was sent to Team Homan ahead of their Winter Games round-robin matchup in Pyeongchang next month.

“Well, I think we can curl, too,” said Tirinzoni with a smile. “I don’t know if we sent a message; you’d have to ask them. But every game is different; I don’t know, I’ve probably played 2,000 games in my career and every game is different. So we played them again right away? It’ll probably be a different score. But every win we can put on our side playing her, if you can get in her head a little bit, that doesn’t hurt, for sure.”

For Homan, vice-skip Emma Miskew, second Joanne Courtney and lead Lisa Weagle, Thursday’s game was their first together since the women’s gold-medal game of the Tim Hortons Roar of the Rings, 32 days ago in Ottawa, where their trip to the Winter Olympics was sealed.

Taking that into account, Homan wasn’t overly concerned by the result.

“We didn’t know the ice, we didn’t know the rocks, so we just took the opportunity to learn it all,” she said. “I think we know it now. We played a really good last three-quarters of the game; it’s just the first two ends that were really tough. You get that far behind, you just use the rest of the game to learn. It was a great second half; made lots of shots, lots of freezes, lots of draws. We’ll see more of that going forward.”

John Shuster’s U.S. men’s Olympic team prevented the morning sweep, scoring a big four in the fourth end and three more in the sixth en route to a 9-5 victory over Sweden’s Niklas Edin

The 2018 World Financial Group Continental Cup, presented by Service Experts, continues on Thursday with a mixed doubles draw at 2:30 p.m, and another round of team games at 7 p.m. (all times Eastern).

As well, the first game of the best-of-five Americas Zone men’s challenge series between Canada’s Glenn Howard and Brazil’s Marcelo Mello is slated for Thursday at 7 p.m.

Tickets for the 2018 World Financial Group Continental Cup can be purchased at www.curling.ca/2018continentalcup/tickets/ or by calling 1-855-985-5000.

TSN (RDS2 in French), the exclusive television network for the Curling Canada’s Season of Champions, will provide complete coverage of the World Financial Group Continental Cup. The event also is being streamed live in the United States on ESPN3. CLICK HERE to see TSN’s broadcast schedule.

This story will be posted in French as soon as possible at www.curling.ca/2018continentalcup/?lang=fr