LONDON, Ont. — It’s all tied up, and it’s looking like it’ll be a close race through to Sunday night’s finale at the 2018 World Financial Group Continental Cup, presented by Service Experts. 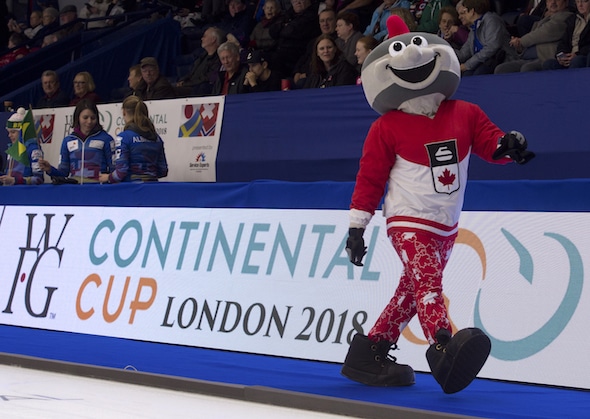 Two Team North America victories in team play on Friday morning at The Sports Centre at Western Fair District left Team North America and Team World tied 6-6 through four draws; the first team to reach 30.5 points will lay claim to the World Financial Group Continental Cup. Each game in team play is worth one point in the overall standings to the winning team.

A total of 60 points are available over the four days of competition, which features traditional team games, mixed doubles games and skins games, with the first team to reach 30.5 points declared the winner.

Kevin Koe’s Calgary team set the pace with an emphatic 8-4 win over Switzerland’s Peter Da Cruz; Koe put four on the board in the second end and never looked back.

Also, Nina Roth’s U.S. team didn’t need to throw its final stone in the eighth end in a 5-4 win over Switzerland’s Silvana Tirinzoni.

In the other morning game, Japan’s Satsuki Fujisawa won her second straight game, stealing two in the second end for a 5-3 win over Winnipeg’s Michelle Englot.

The 2018 World Financial Group Continental Cup, presented by Service Experts, continues on Friday with a mixed doubles draw at 2:30 p.m. and another round of team games at 7 p.m. (all times Eastern).

As well, the Americas Zone Challenge series between Canada’s Glenn Howard and Brazil’s Marcelo Mello continues, with draws at 2:30 p.m. and 7 p.m. Canada leads the best-of-five series 1-0; the winning country will clinch a berth into the 2018 World Men’s Curling Championship, presented by Ford of Canada, March 31-April 8 in Las Vegas.

Tickets for the 2018 World Financial Group Continental Cup can be purchased at www.curling.ca/2018continentalcup/tickets/ or by calling 1-855-985-5000.

TSN (RDS2 in French), the exclusive television network for the Curling Canada’s Season of Champions, will provide complete coverage of the World Financial Group Continental Cup. The event also is being streamed live in the United States on ESPN3. CLICK HERE to see TSN’s broadcast schedule.

This story will be posted in French as soon as possible at www.curling.ca/2018continentalcup/?lang=fr