SHAWINIGAN, Que. — If you’re looking for a player at the 2018 New Holland Canadian Junior Curling Championships who can adjust to a new situation, it would be hard to beat Kaitlyn Jones. 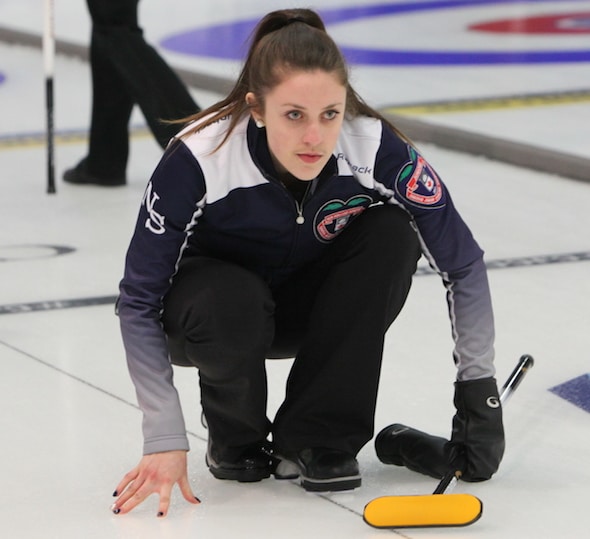 The daughter of an RCMP officer, Jones — who’s skipping the Nova Scotia women here this week — has faced a few different situations over the years thanks to her dad’s transfers to various RCMP postings.

“I think I’m on my ninth or 10th house right now, and fifth province,” said Jones with a smile on Tuesday morning at the Club de curling de Grand-Mère, moments after her Nova Scotia team improved to 4-1 with a 9-4 win over Manitoba’s Shae Bevan (2-2; Winnipeg).

The 2017-2018 curling season didn’t just offer Jones a new hometown of Halifax, it also offered a new team; she skipped Saskatchewan to a 5-5 record last year in Victoria, and at the end of that event she was approached by Nova Scotia coach Andrew Atherton with a seemingly casual question.

“Andrew came and asked me about my plans for next season; I thought it was just about school, but he said that if I ever feel like coming out to Nova Scotia, let him know,” recalled Jones, 19.

Well, turns out she WAS interested; she was looking to attend university, and got along well with the Nova Scotia women last year, so why not go to Dalhousie University in Halifax? And the rest was history.

Last year’s Nova Scotia team was skipped by Kristin Clarke, and needed a new player with Janique LeBlanc turning her focus to her nursing studies; Clarke was only too happy to move from skip to vice to accommodate Jones.

“I’m basically happy to play anywhere where the team needs me to fill out a position,” said Clarke, who won a Canadian and world junior title with Nova Scotia skip Mary Fay in 2016. “I feel like from the start that we’ve gotten along really well, we’ve been able to be honest and open with each other, and we all have a lot of fun together, on and off the ice, which has made it an easy transition.”

With a front end of cousins Karlee Burgess (another member of that 2016 team) and Lindsey Burgess, the team is off to a solid start,

“We had the tough loss against Quebec right off the bat, but we bounced back pretty well against Saskatchewan and we’ve continued playing really well,” said Jones. “Hopefully we can continue that on and make it to the playoffs.”

Fourteen men’s and 14 women’s teams are competing, with two seven-team pools in each gender. Following Tuesday night’s games, the top four teams from each pool will move into the championship pools beginning Wednesday, while the other teams will play in seeding pool games to determine the final standings.