SHAWINIGAN, Que. — Matthew Manuel has been down this road before, and he’s hoping that past experience pays off on Friday morning at the 2018 New Holland Canadian Junior Curling Championships. 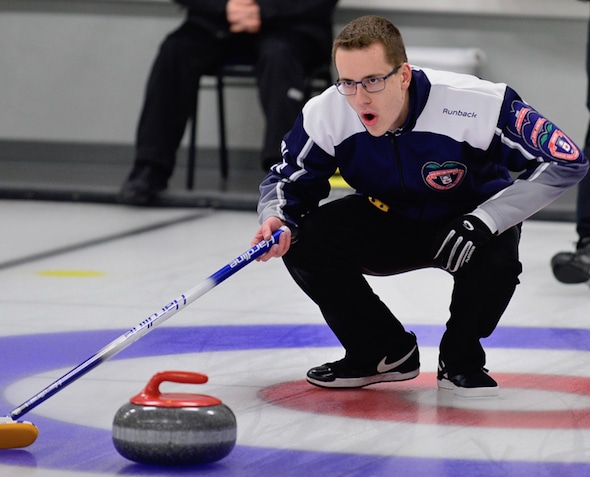 A year ago in Victoria, he 20-year-old Team Nova Scotia skip — along with teammates vice-skip Adam Cocks, second Nick Zachernuk and lead Alec Cameron — needed a victory in their final round-robin game to clinch a tiebreaker berth at the 2017 Canadian Juniors, only to fall short to Alberta’s Colton Goller.

Friday morning at Aréna de Grand-Mère, the 6-3 Nova Scotians are in the same position in the Championship Pool — beat 2017 silver-medallist Matthew Hall of Ontario (6-3; Kitchener) and it’s no worse than a tiebreaker; lose, and the podium hopes are over.

“I think the main thing for now is to stay relaxed and see what we can bring tomorrow,” said Manuel, a mechanical engineering student at Dalhousie University who was a 2017 recipient of the Curling Canada Foundation’s For The Love of Curling scholarships. “Learning from the experience last year is really going to help when we go out there tomorrow morning. We’ll be that much more prepared.”

They’ll also be filled with confidence, thanks to an impressive 6-3 win over Alberta’s Karsten Sturmay (Edmonton) Thursday night.

The result left Nova Scotia, Ontario, Alberta and defending champion Tyler Tardi of B.C. (Langley/New Wesminster) tied at 6-3 for the third and final playoff position; Northern Ontario’s Tanner Horgan (8-1; Sudbury) has already locked up first and a bye to Sunday’s 6 p.m. gold-medal game, while JT Ryan of Manitoba (7-2; Winnipeg) is assured of a tiebreaker at worst.

The win over Alberta wasn’t sealed until Manuel made two clutch hits on partially buried Alberta stones to score three in the ninth end.

“That’s a tough game right there, going out with the backs to the wall and playing against a great team,” said Manuel, who along with Zachernuk and Alex Cameron is in his fourth straight Canadian Juniors. “It feels incredible to come out with the win tonight.

“We were a little disappointed being 3-and-3 in our pool; we felt we deserved maybe a game or two better. But it’s so nice to see the boys rally. Stu’s not here with us this week (long-time coach Stu Cameron couldn’t make the trip due to a health issue) but he’s been telling us, ‘Chip and a chair’ (a poker expression referring to having just one chip in a game, but still being at the table). And right now we’re playing really well and our stack is growing. Hopefully we can keep it up.”

Action continues in the 2018 Canadian Juniors with draws Friday at 9 a.m. and 1 p.m.