SHAWINIGAN, Que. — Tyler Tardi is still nowhere near 100 per cent, but the skip of the defending champion B.C. men’s team at the 2018 New Holland Canadian Junior Curling Championships is feeling much better than his low point earlier in the week. 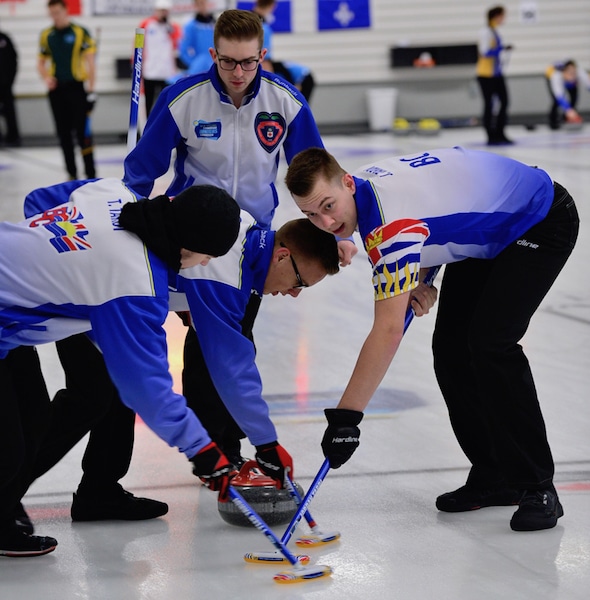 Then, he was having, ahem, stomach issues combined with a stubborn cough that left him barely upright at times.

Friday at the Club de Curling Grand-Mére, he admitted the stomach issue has been largely overcome; the coughing is still a problem but it’s better, and, oh yes, he’d pulled a stomach muscle from coughing so much.

“Still walking,” he said with a smile. “Still breathing.”

Which pretty much sums up the situation of Tardi’s team of vice-skip Sterling Middleton, second (and brother) Jordan Tardi, lead Zac Curtis and coach Paul Tardi (Tyler and Jordan’s dad).

The team has not been near its best here this week, but has rallied in the late stages of the Canadian Juniors, and thanks to a stolen 6-5 win Friday over Northern Ontario’s Tanner Horgan (8-2; Sudbury) will be in a playoff tiebreaker Friday at 1:30 p.m. (all times Eastern).

While B.C. takes on Alberta, Ontario will play Manitoba, with the two winners advancing to Saturday’s 6 p.m. semifinal; the winner of that game will play Northern Ontario for the gold medal Sunday at 6 p.m.

“We’ve been struggling a bit, I’m not going to lie,” said Tyler Tardi, 19, who stole the winning deuce in the 10th end when Horgan was a couple inches light on his last-shot draw to the four-foot. “We’re just hanging in there, and we’ve gotten a bit lucky. That’s the way the sport goes, I guess. But we have a chance, and that’s all we wanted from the start — a chance to be in the playoffs, and mission accomplished.”

Alberta got into the tiebreaker in similar fashion, taking two in the ninth end and then stealing one in the 10th when Ryan was just heavy with his draw for the victory.

“I think the girls are pretty excited,” said Karlee Burgess. “It’s a huge step for us this year. I think for Kris and me, the experience is huge. We’ve been in those big games before.”

Quebec finished the round-robin with a 7-1 win over Prince Edward Island’s Lauren Lenentine (5-5; Cornwall), while New Brunswick was an 8-5 winner over Ontario’s Emma Wallingford (6-4; Ottawa).