SHAWINIGAN, Que. — Just before lunchtime on Friday morning, B.C. skip Tyler Tardi was resigning himself to the knowledge that his reign as Canadian junior men’s champion was minutes way from ending. 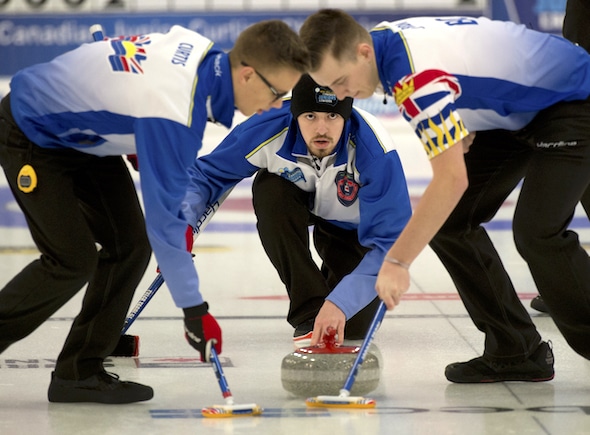 Northern Ontario skip Tanner Horgan was about to throw a fairly routine draw to the four-foot for a win in the final round-robin game of the 2018 New Holland Canadian Junior Curling Championships for both teams, a result that would eliminate Tardi’s team from Langley/New Westminster from a playoff berth.

Saturday night at Aréna de Grand-Mère, the ride continued as Tardi made a hit for two in the 10th end to beat Manitoba’s JT Ryan 9-8 in the men’s semifinal.

And with the win B.C. heads into the gold-medal game Sunday at 6 p.m. (all times Eastern) against none other than the same Northern Ontario team that could have kicked Tardi and Co. to the curb on Friday.

“After what happened in the game against Tanner, with how lucky we were getting, yeah, I definitely believe there’s some destiny,” said the 19-year-old Tardi, whose team won gold at the 2017 Canadian Juniors in Victoria. “You can’t get that lucky and not having something going for you. I don’t know; something’s clicking for us. But I’m glad it is. We keep on fighting; we know that it’s been one more loss and we’re out for the last five or so games. We’ve just been plugging it in and going as hard as we can.”

Nothing came easily on Saturday against a Manitoba team that was all class in defeat, as players took the time to shake hands with and thank the event umpires as they left the ice.

After blanking the first two ends, B.C. opened the scoring with three in the third end, and added a fifth-end deuce to make it 5-2 at the intermission.

But Ryan’s team from Winnipeg — vice-skip Jacques Gauthier (a cousin to the Tardi brothers), second Colin Kurz, lead Brendan Bilawka and coach John Lund — rallied back to tie it with three in the sixth, and took its first lead with a stolen point in the seventh.

The teams then traded deuces in the eighth and ninth ends, before Tardi executed the hit for the win in the 10th.

“Real disappointing, yeah; it sucks,” said Ryan, 20. “They’re such a great team and we spotted them the early three, but we were able to battle back and take the lead, and it was in our hands. We talked before the 10th end that we weren’t happy with the force (to hold B.C. to one and take hammer into the extra end). We wanted to go for it (steal for the win); we executed what we wanted, I just couldn’t make my last one.

“If you told us at the beginning of the year that we would be getting bronze at the nationals, we’d be very happy. Right now it sucks, but we’re happy with how we handled it.”

Both teams in the men’s final have played for gold at this event; Tardi last year, while Horgan’s team from Sudbury lost the 2016 final to Matt Dunstone at Stratford, Ont.

Additionally, Horgan’s younger brother and vice-skip Jacob skipped Northern Ontario to gold at the 2017 Canadian Under-18 Championships (where, by the way, Tardi and Middleton combined with two other teammates to win a bronze medal).

“They’re just as experienced with that kind of thing, so I wouldn’t necessarily say there’s any kind of advantage,” said Tardi. “They’re a great team; we’re just going to have to play the best we can and hopefully come out with the result we’re looking for.”

The women’s gold-medal game is set for 1 p.m., and will feature Nova Scotia’s Kaitlyn Jones (Halifax) taking on home-province hopeful Laurie St-Georges (Laval-sur-le-Lac). Nova Scotia will be looking for its second Canadian title in three years after Mary Fay’s triumph two years ago in Stratford, Ont. Three members of the current Nova Scotia team — vice-skip Kristin Clarke, second Karlee Burgess and coach Andrew Atherton were part of the 2016 team that went on to win gold at the World Junior Championship.

Quebec, meanwhile, will be looking for its first Canadian junior women’s title since Marie-France Larouche prevailed in 1999 at Kelowna, B.C. — the only previous Quebec victory in the women’s event.

TSN/RDS2, the official broadcaster of Curling Canada’s Season of Champions, will provide live and exclusive coverage of both gold-medal games on Sunday. The same games also will be streamed live in the U.S. on ESPN3. CLICK HERE for the broadcast schedule.