SHAWINIGAN, Que. — Tyler Tardi and his British Columbia team will travel to Scotland in just over a month with some unfinished business to take care of. 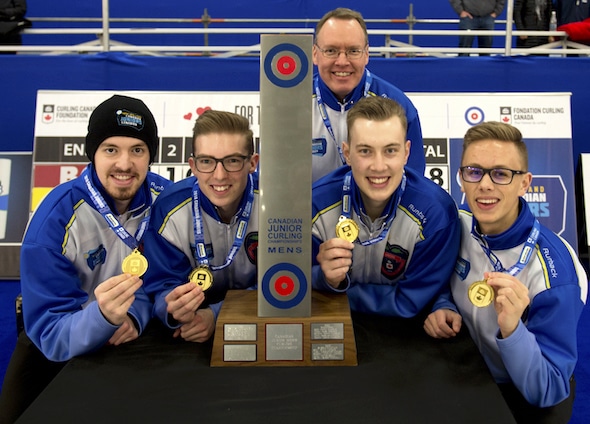 There, Tardi will be looking to improve on a fifth-place finish at the 2017 World Juniors in Gangneung, South Korea — an event Tardi entered with higher expectations.

He’ll aim to meet those expectations this time around with three-quarters of his 2017 team intact — Curtis is the newcomer, replacing the aged-out Nick Meister.

The B.C. team, which was one loss away from being eliminated on Friday morning before stealing a victory over Northern Ontario in its final round-robin game, went on to win a playoff tiebreaker later Friday over Karsten Sturmay of Alberta, and then the men’s semifinal on Saturday against Manitoba’s JT Ryan.

It carried that momentum into the gold-medal game, stealing single points in the first two ends after Horgan misses, then forcing Northern Ontario to a single in the third and then scoring the game’s first deuce in the fourth on an open takeout.

And from then on, it was air-tight play from B.C. that kept Northern Ontario from generating the offence that was necessary to cut into the lead.

After Northern Ontario was forced to one in the sixth, B.C. blanked the seventh end, and Tardi delivered the decisive blow with his inturn draw through a narrow port to score three for an insurmountable 7-2 lead.

“We had a long road to take to get to where we are right now; I still don’t believe it,” said Tardi. “I’m still in shock from last season, let alone two in a row. I’m really proud of the way the boys have been working.”

Northern Ontario hadn’t played a game since the loss to B.C. on Friday morning, and that game inactivity played a role in the slow start, suggested Horgan.

“For sure, it was tough. The ice changed a lot; I mean, we’re supposed to read that and we’re supposed to adapt, and you can’t ask for much more than going into the final with hammer. We got two practices on it and we just didn’t adapt properly,” said Horgan, who also collected silver at this event in 2016 at Stratford, Ont., and bronze a year ago in Victoria, and admitted to some frustration at the near-misses. “I don’t want to be that guy who makes two or three finals and never gets it.”

The B.C. team will head to Scotland looking for Canada’s leading 19th gold medal at the World Juniors, and first since Braden Calvert’s gold in 2015 at Tallinn, Estonia.

“It’s definitely going to take some extra fine-tuning in the next few weeks,” said Tardi, whose team added Manitoba third Jacques Gauthier — the Tardi brothers’ cousin — as an alternate for the trip to the World Juniors. “Try to fix as much as we can, and try to peak at the right time and hopefully we can do the country proud.”

It was B.C.’s sixth men’s gold medal at the New Holland Canadian Juniors.

The Jones team will bring P.E.I. skip Lauren Lenentine as its alternate for the World Juniors.