SHAWINIGAN, Que. — It’s the second time around, but that didn’t make it any less sweet for Kristin Clarke and Karlee Burgess. 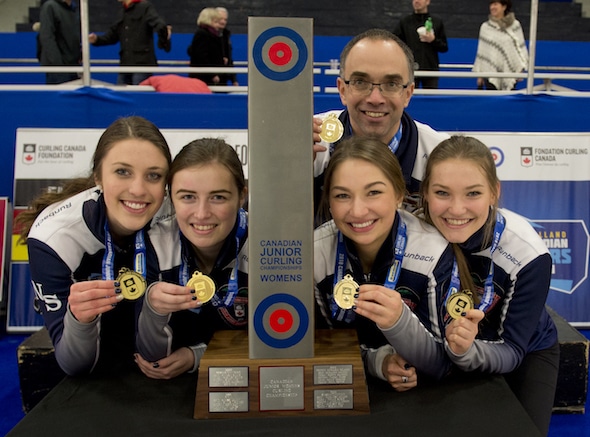 In fact, it may have made it even sweeter that the vice-skip and second for Nova Scotia could share the experience of winning the women’s gold medal at the 2018 New Holland Canadian Junior Curling Championships with a pair of first-timers — skip Kaitlyn Jones and lead Lindsey Burgess (Karlee’s cousin).

“Just that excitement they (Jones and Lindsey Burgess) have now, realizing that they’re Team Canada and they get to represent us at a World Championship — I know that feeling, so getting to see it on their faces and in their emotions is just incredible,” said Clarke, who along with Karlee Burgess teamed with former skip Mary Fay and lead Janique LeBlanc to win the 2016 Canadian and world junior titles.

It was a tight game throughout; the teams blanked four of the first seven ends, with Nova Scotia carrying a 4-2 lead into the eighth thanks to well-crafted deuces in the third and sixth ends, while Quebec had scored a pair in the fourth.

In the eighth end, though, Nova Scotia was able to generate a crucial steal thanks to a series of misses from Quebec, and a wonderful hit-and-roll from Clarke — it was a point that would prove pivotal. St-Georges was left only with a nearly impossible angle-raise with no margin for error; she was a hair wide, and Nova Scotia’s stone was left counting biting the button.

Quebec was forced to a single in the ninth and then run out of rocks in the 10th.

“This game was just awesome; we played well but we missed a couple of key shots,” said St-Georges, who along with third and younger sister Cynthia St-Georges, second/vice-skip Emily Riley, lead Isabelle Thiboutot, alternate Noémie Gauthier and coach Michel St-Georges put together a memorable run here in front of friends, family and Quebec curling fans in a bid to give their province its first Canadian junior women’s title since Marie-France Larouche’s victory in 1999. “But the other team played really well, and I wish the best for them in Scotland. Of course, I’ll be cheering for them. Honestly, we made a lot of great shots this week. We’ll have a lot of great memories.”

Jones, who skipped Saskatchewan at the 2017 Canadian Juniors in Victoria, made a smooth transition to skipping a new team this season, and couldn’t believe the sensation of being a Canadian champion with a new team.

“It feels amazing,” marvelled the 19 year-old arts student at Dalhousie University. “I’m very happy with the decision; I was a little uncertain at first, but I’m happy that I made the move.”

Clarke and Karlee Burgess will have a chance to join Kelsey Rocque (2014, 2015) as the only Canadians ever to win two world junior women’s gold medals.

“We just have to do what we’ve done here,” said Clarke. “I think we did a really good job this week of enjoying the experience and having a lot of fun together. When we’re loose and relaxed and enjoying each other’s company, we play really well, and that’s what we did in the final.”

The men’s gold-medal game between defending champion Tyler Tardi of B.C. (Langley/New Wesminster) and 2017 bronze- and 2016 silver-medallist Tanner Horgan of Northern Ontario (Sudbury) is at 6 p.m. ET, live on TSN/RDS2 in Canada and on ESPN3 in the United States.

TSN/RDS2, the official broadcaster of Curling Canada’s Season of Champions, will provide live and exclusive coverage of both gold-medal games on Sunday. The same games also will be streamed live in the U.S. on ESPN3. CLICK HERE for the broadcast schedule.