PENTICTON, B.C. – Four teams are still at the wheel and four fans from the British Columbia’s Okanagan are along for the ride as the revamped Ford Hot Shots is driven in a different direction for the 24th version of the popular curling skills competition. 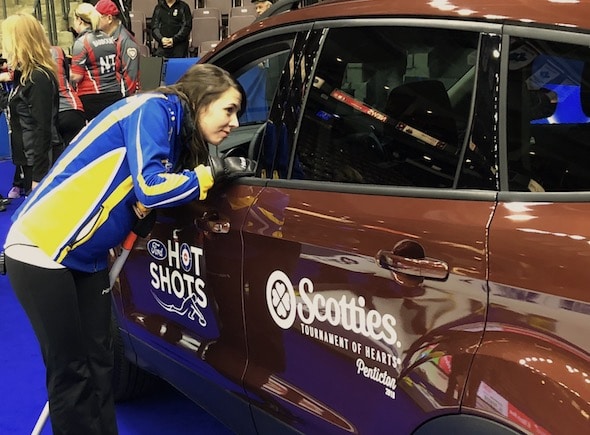 Alberta skip Casey Scheidegger takes a look inside the 2018 Ford Escape SE that will be going to a lucky fan after Saturday’s final in the 2018 Ford Hot Shots.

And leading the way into Saturday’s final round of the Ford Hot Shots at the 2018 Scotties Tournament of Hearts Canadian women’s curling championship at the South Okanagan Events Centre (11:15 a.m. PT), was New Brunswick skipped by Sylvie Robichaud.

Instead of an individual skills contest, like the 23 previous years, the Ford Hot Shots has been converted to a team competition (CLICK HERE for more information) at the Scotties and the Tim Hortons Brier in Regina later this year. Instead of receiving a lease on a new Ford vehicle, the winning team will get $15,000 and a lucky fan will win a two-year lease on a 2018 Ford Escape SE 4WD.

In Friday’s preliminary round, all four team members contributed points on four shots designed by Curling Canada. They include shooters attempting to replicate Northern Ontario skip Al Hackner’s famous shot at the 1985 Brier, a difficult around-the-horn triple takeout, a straight raise and a drag-effect double takeout.

New Brunswick was the top point-getter Friday afternoon with 43 followed by Manitoba and Alberta at 40. Nova Scotia tied with Prince Edward Island for the fourth and final spot at 39 points but got the nod on measurement.

“It was really fun,” said Robichaud. “It was our first time trying all those different kind of shots, so it was fun to make some.

“We were close to making the around-the-horn, just by a little hair or two. I haven’t seen someone do it yet, so it’s really hard.”

Robichaud was looking forward to the final because the cash prize could go a long way to defraying expenses for the team from Moncton.

“It’s great to play for money too (instead of a lease),” said Robichaud. “$15,000 can go a long way, so we’re going for it. It’s a lot tougher (to travel to cashspiels). We have full-time jobs, so getting time off is a little harder for us.”

Robichaud and her New Brunswick team will be playing for Cathy Thompson of Oliver. Penticton’s Arlene Kolundzic will be cheering on Jennifer Jones’s Manitoba squad. Blaine Lodomez of Penticton is paired with Alberta, skipped by Casey Scheidegger, while Mary-Anne Arsenault’s Nova Scotia champions will get support from Ray Turner from Kelowna.

The three fan entrants who don’t win will get a $500 donation to a local charity of their choice.