PENTICTON, B.C. – Arlene Kolundzic looked to be a perfect fit behind the wheel of the 2018 Ford Escape SE. 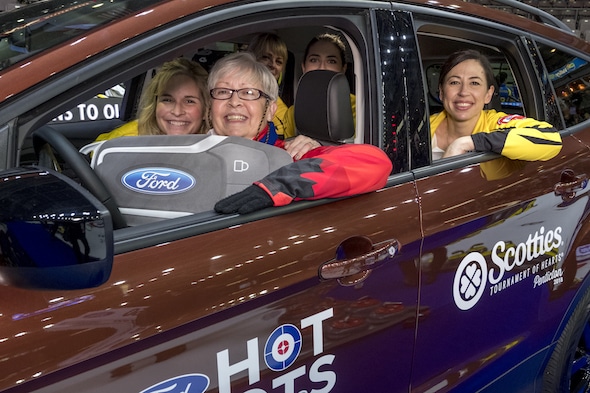 Arlene Kolundzic of Penticton takes the wheel of a 2018 Ford Escape LE with members of Team Manitoba; Kolundzic was the lucky fan who was paired with Team Manitona to win the 2018 Ford Hot Shots contest. (Photo, Curling Canada/Andrew Klaver)

That’s because there were several things that fit quite nicely for the Penticton woman to win a two-year lease on an Escape thanks to Team Manitoba’s winning performance Saturday in the Ford Hot Shots competition’s new format. This year, instead of an individual skills contest like the 23 previous years, the Hot Shots was converted to a team event. The top scorer used to get a lease on a new Ford vehicle, but this year Manitoba, as the winning team, received $15,000 while a lucky fan, Kolundzic, won a two-year lease on a Ford Escape SE. After Friday’s preliminary round pared the teams down to four for Saturday morning’s final round Kolundzic found out she would be paired with Manitoba skipped by Jennifer Jones. “I couldn’t believe it when I got the message that I was paired with Manitoba. I thought, ‘Oh boy, I stand a good chance,’ ” said Kolundzic, clutching the symbolic key presented to her. “I’ve always liked Manitoba. Jennifer Jones has been my girl. “That was the team that I followed. I really enjoyed the way she curls, she’s a good sport, she’s an awesome curler.” Not only was the fit of Kolundzic and Manitoba perfect, but so is Kolundzic getting to bop around Penticton in an Escape for two years. “My husband’s disabled. He’s in a wheelchair. So this is going to be a perfect vehicle to pair with his collapsable wheelchair. Plus I do volunteer work with elderly people with walkers or chairs, so that’s a perfect vehicle,” said Kolundzic, who often runs errands for seniors, taking them to doctor appointments or out for a walk. All four team members contributed points on four shots designed by Curling Canada. The shots included shooters attempting to replicate Northern Ontario skip Al Hackner’s famous shot at the 1985 Brier, a difficult around-the-horn triple takeout, a straight raise tap and a drag-effect double takeout. Manitoba’s 57 points were 10 more than second place Alberta. Nova Scotia had 44 while New Brunswick, which had the top preliminary round team score of 43 Friday, finished with 34. Lead Dawn McEwen was Manitoba’s top point getter with 18 out of 20, scoring five on three of her shots. Third Shannon Birchard notched 17 for the team. “That’s kind of strange for a lead,” said McEwen with a laugh about being the Hot Shots’ top gun. “I actually really enjoyed this format. It’s fun. It’s just something totally different to do. It was really exciting having a fan having the opportunity to have a car.” The other three fans from the Okanagan Valley – Cathy Thompson of Oliver, Ray Turner of Kelowna and Blaine Lodomez of Penticton – paired with the team finalists will receive a $500 donation to a local charity of their choice.