Newfoundland/Labrador ready to take next step at Scotties

PENTICTON, B.C. — Stacie Curtis and her Newfoundland/Labrador team from St. John’s learned some lessons a year ago in St. Catharines, Ont., that they hope to put into practice at the 2018 Scotties Tournament of Hearts. 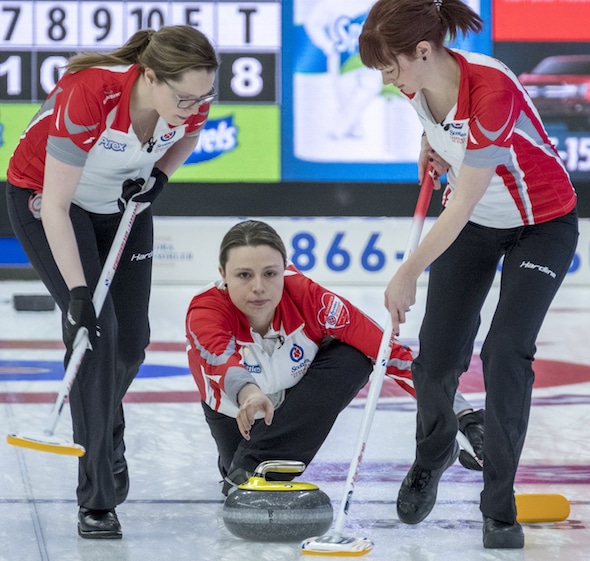 Stacie Curtis, centre, along with teammates Julie Devereaux, left and Erica Trickett improved to 2-0 on Sunday at the 2018 Scotties. (Photo, Curling Canada/Andrew Klaver)

Curtis, with vice-skip Erin Porter, second (and sister) Julie Devereaux, lead Erica Trickett and coach Eugene Trickett improved to 2-0 in Pool B at the 2018 Scotties on Sunday morning, knocking off Ontario’s Hollie Duncan (0-2; Toronto) 8-5 at the South Okanagan Events Centre.

That 2-0 start to the Scotties matches what transpired in 2017 in St. Catharines — the city in which Curtis won a Canadian junior women’s title 10 years earlier.

But at the 2017 Scotties, Newfoundland/Labrador would lose its next six games to fall out of the playoff hunt before rallying to win its final three to finish with a 5-6 record — Curtis’s best record in five cracks at the Scotties.

“We talked about it a little bit before the Tournament, that we were going to have to get off to a good start,” said Curtis, 31. “We talked about some of the things we did last year before the event that worked for us and got us off to a decent start, and where we faltered in the middle of the week. So we’re right where we want to be. We’ll see what happens.”

“I thought we played a little bit better as a team today; maybe not me personally, but the girls played really well,” said Curtis, who opened with an 11-6 win over Prince Edward Island on Saturday. “2-and-0 is kind of where we wanted to be to start the tournament, obviously, but there’s a long way to go.”

Still, having improved her record in each of her five appearances at the Scotties, Devereaux and Co. arrived in Penticton with some higher expectations.

“I think we’re ready,” she said. “I think we’re certainly building, and I don’t think we’ve peaked yet. We still have a lot to learn. We’re still working hard, and we’ll continue to work hard until we get there. We certainly want to make it into that Championship Pool, and we’re well on our way. Still lots of work to do, but we want to be around at the end of the week.”