That game was phenomenal. I mean, right from the first rock — perfect draws, perfect taps, double-takeouts, a couple in-offs. Kaitlyn and John were clicking on all cylinders, that’s for sure. 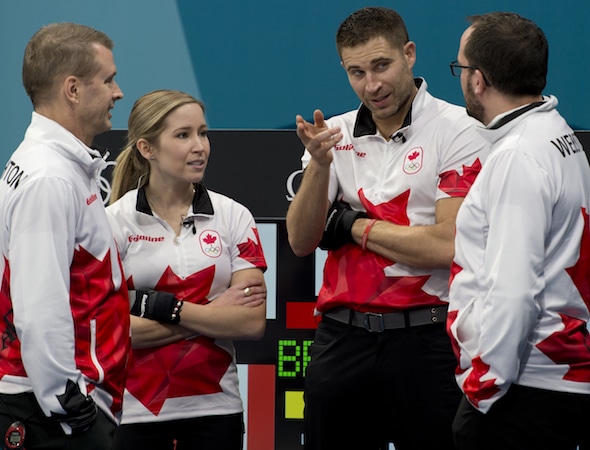 I would say that would rank right up there with any of their games for execution. There was maybe one miss in the whole game, and that’s pretty amazing when you throw that many shots in six ends. And pretty much all of the other shots were four or five out five. So it was great; they’re going in the right direction, and it’s really exciting to see we’re in the playoffs and one win away from the gold-medal game.

Watching them out there is a lot of fun right now, and I think it’s that comfort zone that they’re in. They’re getting so comfortable with one another, being able to speak their minds, being able to trust one another completely — that’s all you can ask for a mixed doubles team. We know they both can shoot lights out; it’s just that communication and getting some comfort with each other, being on the ice, knowing where the broom’s going to go, and knowing that each other has that ability to make a key shot. 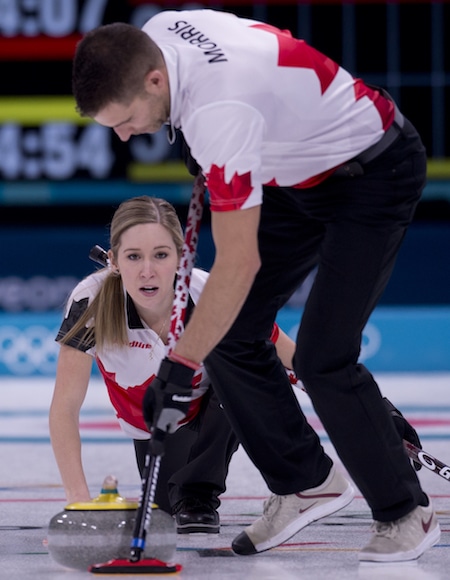 You also notice that there’s not a lot of talking between them about strategy, because they’re so closely aligned. The shot is sort of known by both of them without talking about it, so it’s not as big of a deal to execute. That’s a really good place to be in.

We know we’re going to play in the semifinal on Monday, but we don’t want to take our foot off the gas for tomorrow’s game (against South Korea; 7 p.m. EST Saturday, TSN3, TSN4, TSN5) and take anyone lightly. We want to keep the momentum going, so let’s continue to get comfortable out there, let’s continue to make sure we have good rocks — it’s just a mindset of continuing what they’re doing, and not thinking about the semifinal until we get through tomorrow morning.

There’s a long gap between games here, so the support staff did a few things to keep busy today. (Team Leader) Paul (Webster) and I stayed at the rink to throw some rocks on Sheet A, so we could get some matches for tonight’s game. Then we headed back and had lunch at the Athletes Village.

(Performance Consultant) Kyle (Paquette) and I played a little road hockey in front of the Canadian athletes building, and then we went to E-Mart to get some supplies for our rooms. After that, we picked up Kaitlyn and John at Canada Olympic House, where they were spending some time with their families.

And then I kicked Kyle’s and Paul’s butt in ping pong. It was the perfect way to get ready for tonight’s game!