We knew today’s semifinal against a really good Norway team wasn’t going to be easy, so nobody should be surprised that it was a grind. 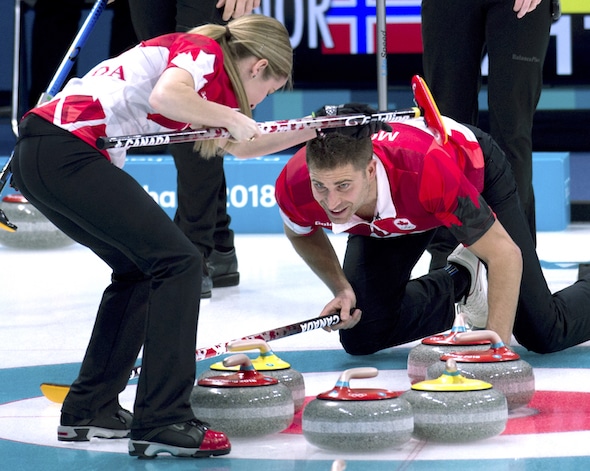 The pivotal hit for three in the seventh end that lifted Canada to victory in Monday’s semifinal. (Photo, World Curling Federation/Curling Canada/Michael Burns)

What was great to see was how Kaitlyn and John persevered, even when things weren’t always going their way in the first four ends.

We had a good talk at the fourth-end break (when Canada was leading 3-2). I reminded the crew that we’re still winning the game and we’re going to be a better team in the last four ends when the pressure is on. Feel good about what you’re throwing and don’t worry too much about the rocks because they are what they are.

John confirmed with Kaitlyn that he had a couple beauties (matched stones) if she wants to use them, and I think she threw them later on in the game. And she made a really nice freeze in the fifth end with her last one (that led to a steal of two), and obviously made the eventual game-winner in seven for the three.

So the fourth-end break was just about boosting their confidence, maintaining their confidence. We know what kind of talent they have, but it’s pretty well-known that this is the toughest game in curling, with the one-four, two-three semifinals that they use at the Olympics. Now, the pressure is off, and you almost feel relieved to get through it, and you can start looking forward to a huge gold-medal game. And I think because that pressure is off, their performance will be better. 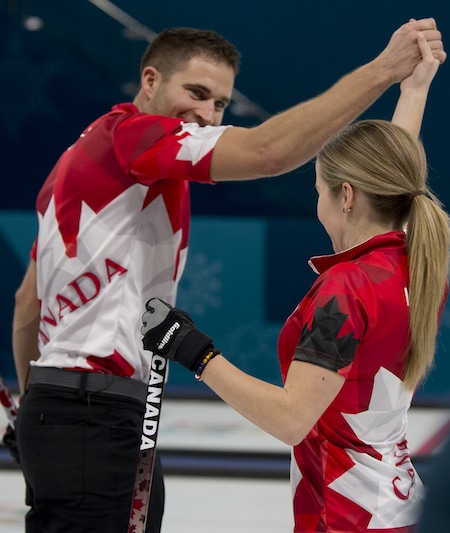 Kaitlyn and John certainly know how to pick each other up. When one has struggled, the other is always complimenting them, keeping them up. It was never in doubt that they felt each other could perform when the time came, and they did.

We won’t know who we play in the gold-medal game on Tuesday (6 a.m. ET, TSN1, TSN3, TSN4;TV plans subject to change) until after the other semifinal tonight (between Switzerland and the Olympic Athletes from Russia). And there’s no preference at all about our opponent. We know they’re both going to play great, and it should be a fantastic final — we’re looking forward to it.

There’s not much we can do as a coaching staff at this point; you don’t want to get out of your routine too much. I don’t think you want to go to three (non-curling) events today; I think they’ll just take it easy, rest and recover. It is a long wait, so maybe play some cards, visit with the families — just the regular stuff they’ve been doing. I think it’ll work out just great.

We’ve actually noticed that there are a few players who like to cheat at cards a little. Not naming any names, but it’s starting to show up, and we’re calling them on it. A little table-talk, a little bragging. But we all know who’s the best card player. And it’s not me.

It’s been fun, though. We’ve been playing 9-5-2, euchre, crib — we’re having a lot of good laughs, and with so many events going on that we can watch on the TV, we’ve been able to catch our fellow Canadians performing, and that’s been really great to see.

It’s amazing to think the mixed doubles event is almost over. I know Kaitlyn and John are hearing your cheers, and they know you’re behind them. One more to go!