There will be 15 challengers looking to remove the crown from Brad Gushue when the 2018 Tim Hortons Brier, presented by Mosaic, kicks off on March 3 at the Brandt Centre at Evraz Place in Regina. 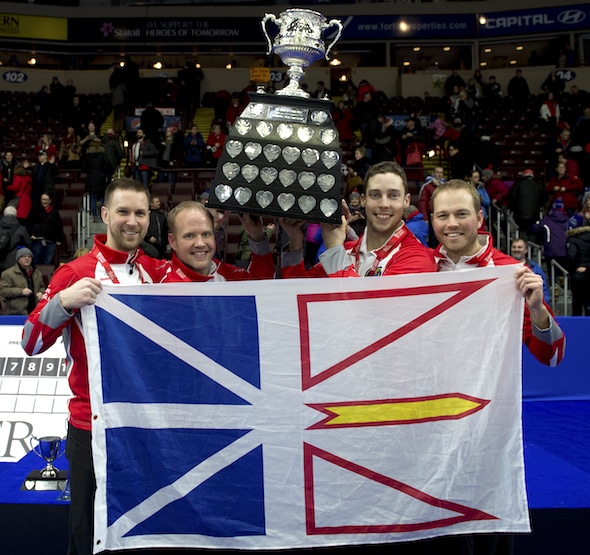 Gushue’s defending champion Team Canada foursome from St. John’s — vice-skip Mark Nichols, second Brett Gallant, lead Geoff Walker and coach Jules Owchar — will look to make it back-to-back titles at the Canadian men’s curling championship, which runs March 3-11. But with the expanded 16-team, two-pool format, making its debut at the Tim Hortons Brier, there will be no shortage of intriguing matchups after the field was completed on Sunday with the final group of provincial/territorial qualifiers determined. And the first of those matchups will take place the night before the Tim Hortons Brier officially kicks off as a pair of Winnipeg teams, skipped by Mike McEwen and Jason Gunnlaugson, will meet in the first Tim Hortons Brier Wild Card Game. They were the top two teams on the Canadian Team Ranking System that didn’t qualify out of their provincial/territorial playdowns. That game will take place March 2 at 7 p.m. (all times Central) at the Brandt Centre, with admission free to all spectators. The winner will get the last available berth into the Tim Hortons Brier main field. Gushue won’t be the only former champ in the field; 2013 champ and 2014 Olympic gold-medallist Brad Jacobs won his fourth straight Northern Ontario championship in dramatic fashion on Sunday, defeating 2018 New Holland Canadian Juniors runner-up Tanner Horgan of Sudbury 6-5, needing steals in the ninth and 10th ends for the victory. Horgan, a two-time Canadian Juniors runner-up, will accompany the Jacobs team to Regina as the alternate. The teams will be split into two pools of eight, with the top four teams from each pool then advancing to a championship pool that will determine the final four playoff teams. The pools are set based on the teams’ position on the CTRS as of Dec. 31, 2017; the winner of the Wild Card game will automatically have a No. 4 seed. Here’s a look at how the two pools set up (teams listed according to seeding): Pool A Pool B The Friday of the Wild Card Game will be a full day of free activity at the Brandt Centre. At 1:30 p.m., it kicks off with the opening rounds of the Ford Hot Shots competition. It continues at 4 p.m. as the Canadian Olympic men’s curling team, skipped by Kevin Koe, will have an autograph session in the arena. An hour later, at 5 p.m., it’ll be the final round of the Ford Hot Shots, during which a lucky fan will win a two-year lease on a 2018 Ford Escape. And while the Wild Card Game is underway, the Patch will officially open at 8:30 p.m. in the International Trade Centre, and Team Kevin Koe will be introduced on stage. CLICK HERE to check the schedule for the 2018 Tim Hortons Brier. You can purchase tickets at the Brandt Centre box office, online at curling.ca/tickets or by phone at 1-855-985-5000. TSN/RDS2 will provide complete coverage of every draw at the 2018 Tim Hortons Brier. CLICK HERE for the complete broadcast schedule.