That was the usual grind we always have when we play Thomas and the boys from Norway. In the end, though, Kevin made some great shots down the stretch to get us the win. 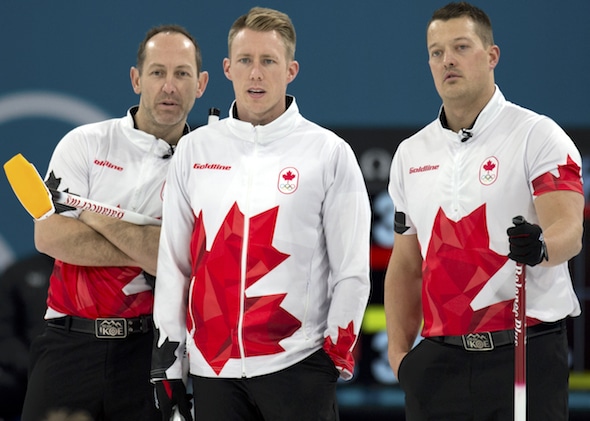 That’s kind of what Kevin Koe does. In the biggest moments, he makes his best shots, and it doesn’t really matter to him what’s happened on the shot before, the end before, the game before, the day before — he’s one of the best in the world at just having a look at what’s in front of him, right then and there, and having the confidence to make the shot. And the one in eight (raise double-takeout) was huge for us (leading to a steal of one).

It’s been great to get on the ice after a few days of waiting, but that was also a really good chance to get the Olympic experience. I watched as a fan four years ago in Sochi when Jennifer was playing. Obviously I heard from her what it’s like to be in the Athletes’ Village, and to be part of a bigger team. But just walking through the Village and seeing all the Canada jackets, and having everybody be so friendly really stands out for me. 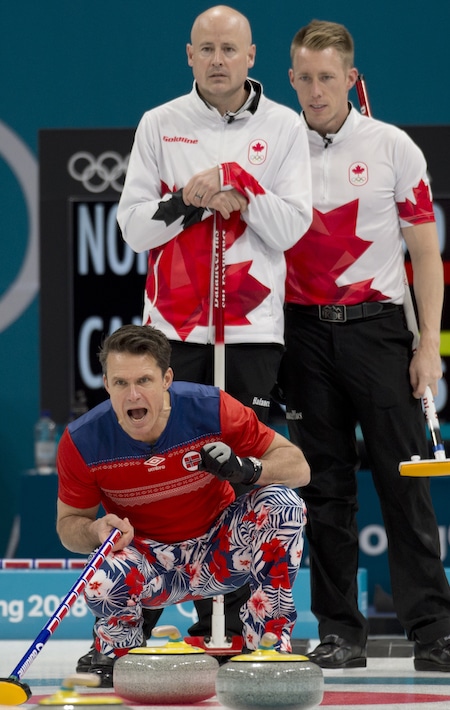 You see the people you’ve watched on TV, like Tessa Virtue and Scott Moir — they go out of their way to make you feel welcome. A lot of them follow curling here and there because we’re on TV so much. (Speed skater) Gilmore Junio told us how much he loved Benny’s broom toss after we won at the Trials. We got to watch some speed skating with the bobsled guys — you just really understand how big of an event this is. It’s hard to really fathom. But once you get out on the ice, it’s not really any different. Same ice, same rocks, same guys around you. And just like the Trials, the pressure will mount as the week goes on.

I think it helps that there’s still so many familiar things here. And we have a great support group around us. Our team’s not just four players; we’re five with Pfeif, and we have Coach John for a six-man team. And it’s gotten larger this week with Rick Lang and Paul Webster around, so we have all the bases covered. We’ve talked a lot about how to deal with distractions. I mean, they’re great distractions, but they are distractions. So we have a good plan for what we need to do — time management, sleep, rest, recovery, physio, all those things.

There might be a danger of something like this not meeting your expectations after so many years of trying to get here, but that certainly hasn’t been the case. Coming here, I didn’t know what to expect. Seeing what they did four years ago in Sochi, facility-wise — I don’t think any city will ever live up to that. It was out of this world crazy; if you had an out-of-this-world budget and didn’t care what you spent, that’s what you would build, so they did. So I knew it wasn’t going to be quite as grand here, but nothing has been any sort of letdown. It’s all been fantastic

It’s a great start for us in the competition; we haven’t played our best yet and we’re 3-and-0, so that’s a great sign. We’re finding ways to win, we’re staying in games and making shots when we need to. We’ll just keep building on that.

We have a tough game against South Korea tomorrow; the crowd will be fired up, so we’ll have to be ready!

(Brent Laing is the second for Canada’s Olympic men’s curling team, and is playing in his first Winter Olympics. Keep checking curling.ca for blogs from Canadian athletes and coaches attending the Winter Olympics; you can watch a replay of the game by CLICKING HERE)