That was a big hug with Benny at the end of the game today against Japan. 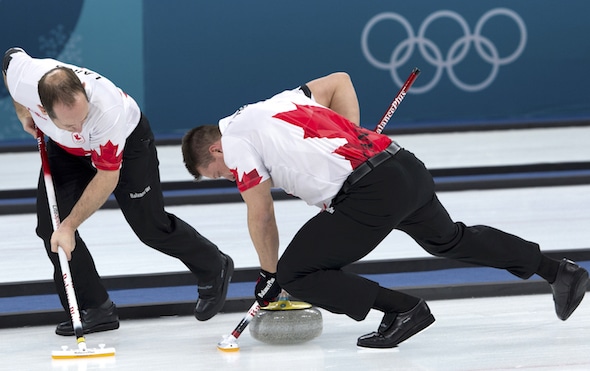 We’re trying so hard, and you can’t help but feel a little bit of the pressure. You want to get another ‘W’ on the board to get that momentum and confidence, so we were happy. It gets us back in the win column, which is great, because nobody likes winning more than Benny and me.

I don’t think he was expecting that hug. When you win and Ben hugs you, it’s like the biggest bear hug you’ve ever had. Hopefully we get a couple more bear hugs later this week. We’re not round-robin huggers, typically, but when was the last time we lost three in a row? It was worth it.

And it was worth it to win and play that well. Our backs were against the wall, and we came out and played a really good game.

We didn’t panic, even when they got the deuce in the second. Honestly, the first three ends were my fault. I made three bad line calls that allowed Japan to get out of some trouble, so I was kind of beating myself up, but good on the boys for keeping me positive and patient, and that just comes from years of experience of having our backs against the wall.

You have two choices when you’re there: pout, pity party and misery, or stay positive, keep working hard and hope for things to turn around. And we chose the second one. I think it’s a good choice, even though it’s not always the easy choice. 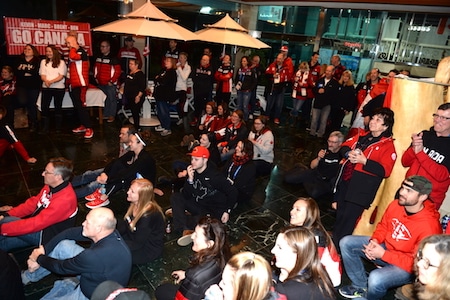 After our loss yesterday to the U.S., we had to go to a reception that Curling Canada was putting on for our curling teams and their friends and family. The reception was terrific, and even though we might not have felt like going after a tough loss, it really couldn’t have come at a better time, just to reconnect with people we haven’t been seeing a lot here.

Honestly, they support us regardless of what we do on the ice, and they’ be proud of us even if we were 1-and-7 right now, but sometimes you just need to experience that in person. It was wonderful to have them around, and it might have been exactly what we needed to springboard us to a few more wins.

My wife Nicole and nine-year-old daughter Aubrey are here, and I’m happy as hell to have them here. They’ve been my biggest support for the last 10 years, and to have my nine-year-old here to watch this is the experience of a lifetime that I hope she remembers.

We had so much support there, family, friends, long-time sponsors who’ve become friends — they weren’t sad for us or anything; they just want us to keep going, keep fighting, and that was our motivation today — we did it for our friends and family.

(Marc Kennedy is the vice-skip for Canada’s Olympic men’s curling team, and is participating in his second Winter Olympics. Keep checking curling.ca for blogs from Canadian athletes and coaches attending the Winter Olympics; you can watch a replay of the game by CLICKING HERE)