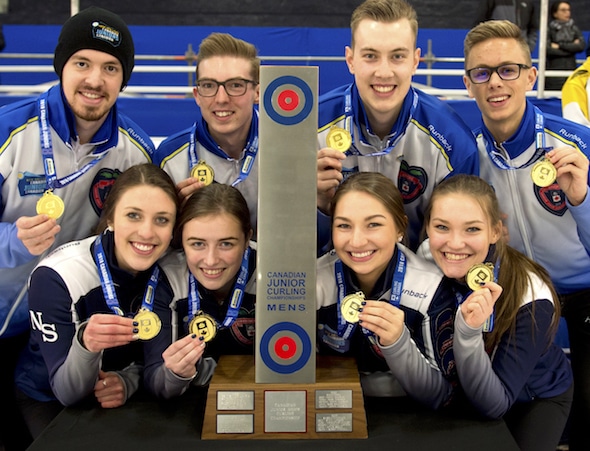 The Canadian teams who will play at the 2018 World Junior Curling Championships in Aberdeen, Scotland. (Photo, Curling Canada/Michael Burns)

Tardi, meanwhile, has vice-skip Sterling Middleton, second Jordan Tardi (Tyler’s brother) and coach Paul Tardi (their dad) back from the 2017 squad that lost to Norway in a playoff tiebreaker in Gangneung. Lead Zachary Curtis and alternate Jacques Gauthier (cousin to Tyler and Jordan) also are making the trip. 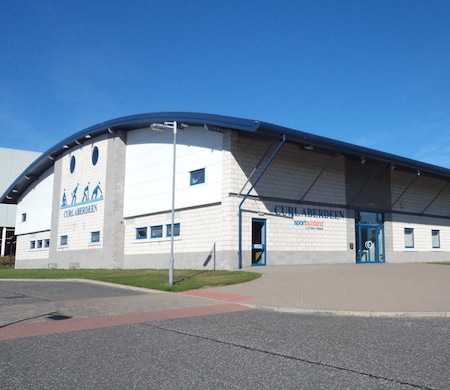 The Canadian women will be seeking a fifth straight trip to the medal podium; Kelsey Rocque won back-to-back gold medals in 2014 and 2015, followed by Fay’s triumph in 2016 and a bronze medal from Kristen Streifel last year in Gangeung.

Canada’s men’s team, meanwhile, will be seeking a leading 19th world junior men’s gold medal (Scotland is next with 10), but first since Braden Calvert’s victory in 2015 at Tallinn, Estonia.

The Canadian teams will be in a 10-team (of each gender) round-robin draw that leads to the four-team Olympic-style semifinals (first place vs. fourth place; second place vs. third place), on Friday, March 9 (there will be no playoff tiebreakers).

The women’s field is headed by reigning world champion Isabella Wranå of Sweden, and also includes South Korea’s Min Ji Kim, who lost to Canada in the bronze-medal game last year, but won bronze in 2016 in Denmark.

On the men’s side, only one of the 2017 men’s medallists is back, as silver-medallist Andrew Stopera of the United States returns with his 2017 lineup fully intact.

The women’s field will be rounded out by teams from Norway, Russia, Scotland, Switzerland, Turkey and the United States.

There will be other men’s teams from China, Germany, South Korea (gold medallists last year but with a different team), Norway, Russia, Scotland and Sweden.

Event information, including news and live scoring, are available at the event website, www.worldcurling.org/wjcc2018

As well, selected games will be streamed live on the World Curling Federation’s Youtube channel, www.youtube.com/WorldCurlingTV

Here’s a look at Canada’s round-robin schedule, along with information (subject to change) on Canadian games that will be streamed live (all times ET):