Team Canada’s women’s and men’s teams kicked off with wins all round today at the 2018 World Junior Curling Championships, a huge accomplishment considering the travel ordeal both teams endured on the way to Aberdeen, Scotland. 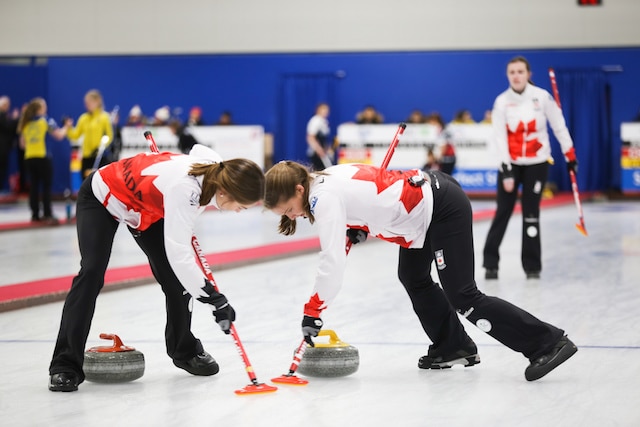 “We had lots of trouble getting here,” admitted skip Kaitlyn Jones of Halifax, N.S., who is backed by third Kristin Clarke, second Karlee Burgess, lead Lindsey Burgess, alternate Lauren Lenentine and coach Andrew Atherton. The team travelled for over 50 hours in a storm-delayed marathon thanks to the extreme winter weather that hit the United Kingdom over the past week. “We went from Halifax to St. John’s, N.L., and had to get off the plane and back on,” Jones explained. “From there to London – that was only five hours. We had an hour layover there. Then from London, we actually came to Aberdeen, but we had to circle because there was too much snow and then we had to go to Manchester and they wouldn’t let us land there. Then we had to go to Liverpool and we sat on the tarmac for three hours and finally went back to London, and sat on the tarmac there for another two hours. So, we were on the same plane for nine hours (without) food. We had to stay the night in London and then travelled to Aberdeen the next day.” The Canadian men’s team, skipped by Langley, B.C.’s Tyler Tardi with third Sterling Middleton, second Jordan Tardi, lead Zachary Curtis, alternate Jacques Gauthier and coach Paul Tardi faced similar delays, although they were able to deplane in London and wait it out in a hotel. The Canadians weren’t the only competitors to have difficulty travelling to Aberdeen. Because so many teams were delayed, the usual pre-event practice was cancelled on Friday to keep it fair for all teams. That meant that Draw 1 (women) and Draw 2 (men) was the first time any of these national junior champions had a chance to step on the ice at Curl Aberdeen. “It was a little bit shaky because we hadn’t practiced or played a game in a while,” said Jones about her team’s first game, an 8-5 win over China’s Zixin Wang. “But by the end we got the ice under control and knew where to (put) the broom. Having that first win and starting off real strong, I’m very happy with that.” In Draw 3, their second game of the day, the Canadian women had their hands full with an experienced Turkish team skipped by Dilsat Yildiz, who has represented her country at Women’s, Mixed and Mixed Doubles world championships. The teams were tied after eight, and Jones scored a single in nine to take a 6-5 lead. Facing two Canadian counters, Dilsat tried an in-off but just over-curled, giving up a steal of two in an 8-5 win for Canada. Tardi and crew had an easier time in their one game of the day, scoring four points in the ninth end to take a 7-3 win over Switzerland’s Jan Hess. 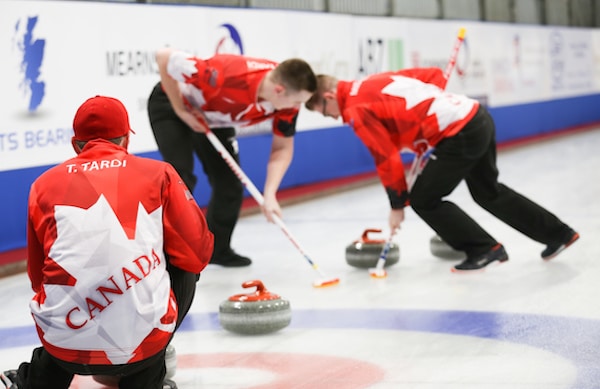 “It’s good to start with a win, especially against a team like that,” said Tardi, who is making his second consecutive trip to the world championships. “They made a ton of shots out there, lots of respect to them. They’re all great shooters and also a super-friendly team.” Tardi said his team prepared differently this time around, using their 2017 experience as a guide. “We were a little smarter coming out the event this year,” he said. “Last year, we played a little too much curling, were pretty drained before the event started. So, this year we took it a little easier before we came here and are feeling a little more fresh.” Action continues on Sunday with the women facing home-country favourites, Scotland, skipped by Rebecca Morrison (9 a.m. ET). The men will play two games, starting off against Sweden’s Daniel Magnusson (4 a.m. ET) and finishing the day against Scotland’s Ross Whyte (2 p.m. ET). Both Scotland games will be streamed live on the World Curling Federation’s Youtube channel, https://www.youtube.com/WorldCurlingTV The Canadian teams will be in a 10-team (of each gender) round-robin draw that leads to the four-team Olympic-style semifinals (first place vs. fourth place; second place vs. third place), on Friday, March 9 (there will be no playoff tiebreakers). Event information, including news and live scoring, are available at the event website, https://www.worldcurling.org/wjcc2018 Selected games will be streamed live on the World Curling Federation’s Youtube channel, https://www.youtube.com/WorldCurlingTV