REGINA – If Jamie Murphy has any plans to pull off at the 2018 Tim Hortons Brier, presented by Mosaic, what fellow Haligonian Mary-Anne Arsenault accomplished last month at the Scotties Tournament of Hearts, he’s off to a good start. Murphy’s Nova Scotia squad overcame a 6-3 deficit after six ends to defeat Greg Smith of Newfoundland/Labrador 9-6 Sunday to improve to 2-0 in the eight-team Pool A round robin. Arsenault flew under the radar at the Scotties to reach the final weekend Page playoffs, leading Nova Scotia to a third-place finish. “We certainly watched what they did. They prepared and compete very similar to our team. Every year we get to come back to this type of event, we get a little bit more comfortable. It’s a long week. We’ve won a couple of games, but we still have five games left in our pool and hopefully we can get ourselves into the (Championship Pool) and go from there,” said Murphy, 36, who is skipping in his fourth Tim Hortons Brier, including last year when Nova Scotia was 4-7. “That’s the way we want to start. We’ve had a couple of good starts the last few years. We’re still trying to find out the ice, a little different than yesterday.” Murphy, third Paul Flemming, second Scott Saccary, lead Phil Crowell and coach Bruce Lohnes gave up three to Smith, who is fast becoming a fan favourite with his flashy shot-making and reactions, in the third end to fall behind 4-2. “Against any team out here if you don’t play well in an end they’re going to take two or three on you,” said Murphy. “The ice got tricky toward the last half of the game, we just stayed patient with it. We started getting our rocks in a good position and picking up on what we could get away with.” Joining Murphy at 2-0 were Team Canada (St. John’s) skipped by defending world champion Brad Gushue, and Team Wild Card (Winnipeg) with Mike McEwen calling the shots. 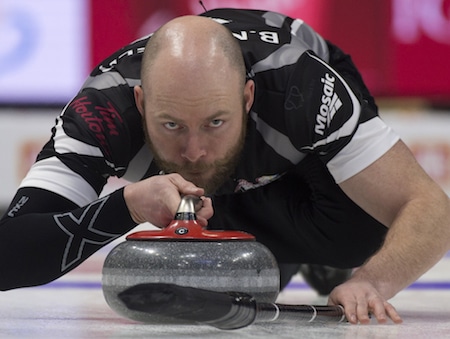 Both were pre-event favourites and are living up to their rankings. Team Canada (St. John’s) took care of business by downing Thomas Scoffin of the Yukon Territory (0-2; Whitehorse) 8-3. McEwen, meanwhile, handed Sean Geall of British Columbia (0-2; Kelowna) a 9-3 defeat. Gushue’s win was his 113th in Brier history, tying him for the all-time record with Russ Howard and Kevin Martin. In other Pool A action, deuces were wild for Alberta’s Brendan Bottcher (Edmonton) in his 9-2 victory over Jamie Koe of Northwest Territories (1-1; Yellowknife). Bottcher scored two in each of the second, third and fourth ends before getting a steal of one in the fifth for a 7-0 lead. It was a much-needed win – considering it came on the heels of a 7-6 loss to Nova Scotia on Saturday – that evened Alberta’s record at 1-1. “We just got off on a bit of a wrong foot yesterday. We were just trying to get settled. The second half of the game we did figure it out, it just took a little bit too long. It’s nice to come out and get our feet under us, have a real solid game as a team and hopefully set us up for the rest of the week,” said Bottcher, who is supported by third Darren Moulding, second Brad Thiessen and lead Karrick Martin. Even though it’s early, teams like Bottcher’s, which went 4-4 at the Tim Hortons Roar of the Rings in December, can’t afford too many losses along the way if they hope to reach the Page playoffs next weekend, especially when Alberta has encounters with the highly ranked Team Canada and Team Wild Card still ahead of them. “We need to get on a little bit of a roll here and hopefully when we play those last games against Gushue and (McEwen we’re in a pretty good place,” said Bottcher. “You’re going to drop a few along the way, you’ve just got to hope you don’t get on a bad streak.” The 2018 Tim Hortons Brier presented by Mosaic continues with a draw today at 7 p.m. and draws Monday at 9 a.m., 2 p.m. and 7 p.m. (all times CST).