REGINA — His first win was against Saskatchewan, so it was perhaps fitting that his record-breaking win took place in Saskatchewan.

Brad Gushue skipped his Team Canada foursome from St. John’s to an 8-4 triumph over Jamie Koe of the Northwest Territories (1-2; Yellowknife) on Monday morning at the Brandt Centre to improve to 3-0 at the 2018 Tim Hortons Brier, presented by Mosaic.

More notable — the victory was the 114th as a skip of his brilliant career at the Tim Hortons Brier, putting him at No. 1 on that list, and breaking him out of a three-way tie he’d joined on Sunday at 113 with previous record-holders Russ Howard and Kevin Martin.

“I wasn’t even aware of it until last night, and I was a little bit nervous when we were tied up and down one (against the Territories),” said Gushue, whose defending Tim Hortons Brier champion team is rounded out by vice-skip Mark Nichols, second Brett Gallant, lead Geoff Walker, alternate Tom Sallows and coach Jules Owchar. “But it’s nice to achieve. Obviously I’ve been here lots, but what I’m most proud of is that each time we’ve been here, we’ve been competitive. And to be up there with Kevin and Russ, it’s pretty elite company. Two guys I’ve idolized and looked up to, and had the honour of playing with over the course of my career. To be up there with those guys is pretty cool.”

The first victory, for the record, took place on March 1, 2003, at the Metro Centre in Halifax.

“I do remember it,” said Gushue with a smile. ”We played Doug Harcourt from Saskatchewan, in Halifax. We were tied up coming home, he had one biting the eight-foot on the centre-line. I made a real nice draw to the back of the four-foot, and he just missed the runback. I remember it pretty vividly, and obviously I’ll remember this one, too.” 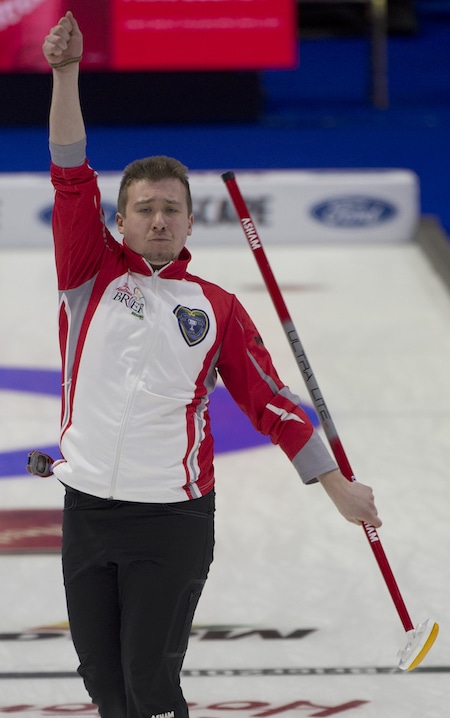 Against the Territories, Canada was in a 3-3 deadlock through five ends, but put the game away with two in the sixth end and three in the eighth, prompting handshakes.

“We made a couple mistakes in that game; the first two games, we played really, really good. And even in that one, we played well; just a couple wrong-side misses that we need to clean up,” said Gushue. “But overall, I like how the guys are throwing it, I like our attitude out there, and I like how we’re working as a team. Things are going pretty good at this point.”

There were actually a pair of milestones for Newfoundland/Labrador teams on Monday morning. One sheet over from the Canada-Northwest Territories game, Tim Hortons Brier rookie Greg Smith picked up his first career victory, skipping Newfoundland/Labrador to a 7-6 win over the Yukon’s Thomas Scoffin (0-3; Whitehorse).

“It was unbelievable; I started clapping when they showed (Gushue) on the screen at 113 wins last night, and to see 114 today is incredible,” said Smith. “It’s a great day for Newfoundland and Labrador curling.”