Canada’s Kaitlyn Jones is bringing home a gold medal after a 7-4 win over Sweden’s Isabella Wranaa today at the 2018 World Junior Curling Championships in Aberdeen, Scotland. 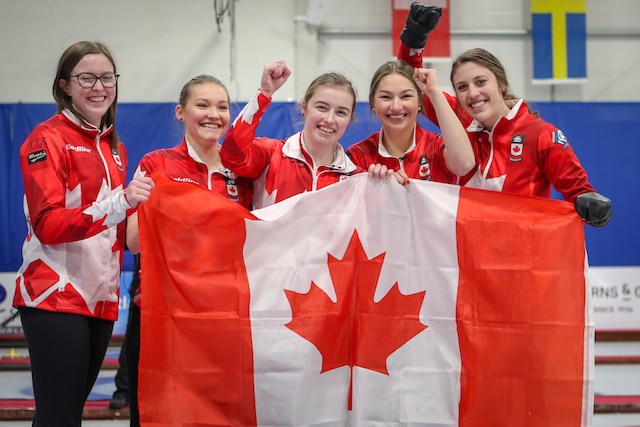 Jones, third Kristin Clarke, second Karlee Burgess, lead Lindsey Burgess, alternate Lauren Lenentine and coach Andrew Atherton put on a show in the final, making shot after shot with pinpoint accuracy and giving Wranaa, the 2017 world junior champion, very few opportunities to get any offence going. The turning point was a score of three in the fifth end that gave Canada a 5-2 lead at the break. The teams traded singles in the next two ends, but Jones stole a point in the eighth to take a 7-3 lead. After that, it was an exercise in keeping the house clean. “It’s indescribable, I feel amazing right now,” said an elated Jones after the game. “I know I put everything out there on the line today and came out on top, and that’s an incredible feeling.” “It (was our) goal to force them to one, and we got the end-goal that we wanted,” she said about the team’s winning strategy during the final. “Whenever they had the hammer we wanted to keep them close to one.” “I’m super proud of my team,” she added. “We’ve worked so hard to get here, and for me moving all the way across Canada to play with them, it was one of the best decisions I’ve made.” For Clarke and Karlee Burgess, this marks a return to the podium. Both were on the 2016 world championship team, skipped by Mary Fay. Jones joined the team this season after moving to Nova Scotia from Saskatchewan, where she was the 2017 provincial champion. China’s Zixin Wang won the bronze medal with an 11-5 win over Norway’s Maia Ramsfjell. The Canadian junior men, skipped by Tyler Tardi, will meet Scotland’s Ross Whyte in the men’s final at 9 a.m. ET. The game will be streamed live on the WCF YouTube channel at https://youtu.be/C3aQLuvCnm8