NORTH BAY, Ont. — As it stands, Diana Gaspari’s Italian team is in the playoff picture at the 2018 Ford World Women’s Curling Championship. 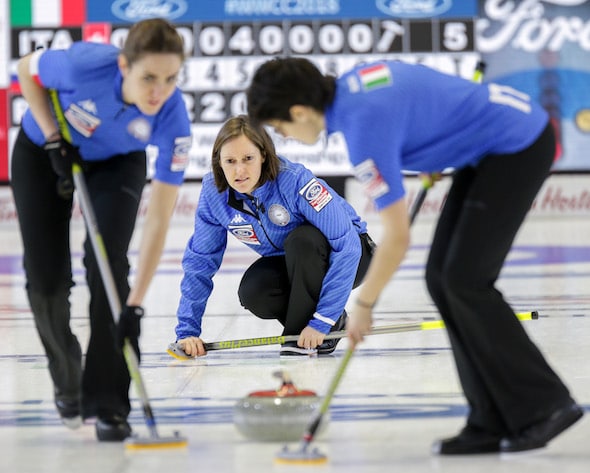 But after knocking Russia’s Victoria Moiseeva (3-1) from the ranks of the unbeaten on Monday morning at the North Bay Memorial Gardens with a 6-5 victory, Gaspari is refusing to look to the possibility of her country reaching the playoffs at the World Women’s Championship for the first time ever.

“We have really short-term goals, for each game because of the type of team we are,” said Gaspari, who’s skipping in her 11th world women’s championship. “We want to improve our record from last year; that is our first goal. Then we will see what happens.”

A year ago in Beijing, Gaspari skipped Italy to a 3-8 record. But with Monday morning’s win, Gaspari, third Veronica Zappone, second/vice-skip Stefania Constantini, lead Angela Romei, alternate Chiara Olivieri and coach Violetta Caldart are 2-2 and on pace to grab one of the six available playoff berths in the expanded 13-team format.

“We’re happy to have two wins in four games,” said Gaspari. “We know that we’re a middle-ranking team; we could lose all of the games easily. So we really need to fight on the ice. We’re not so used to this (level of) competition, so we’re happy with every win we have.”

The Italians were down 4-1 through four ends after Russia cracked a deuce in the third end and stole two more in the fourth. But Italy turned the tide by scoring four in the fifth end. It was a tight finish, but Gaspari was able to remove a partially buried Russian stone for the victory in the 10th end.

“I was shaking a bit, especially the last takeout,” she said with a smile. “This ice is really sensitive to releases, so you really need to focus on technique and have a clean release.”

In the only other game on Monday morning, Sweden’s Anna Hasselborg improved to 4-0 with a 6-4 win over Jamie Sinclair of the U.S. (2-2).