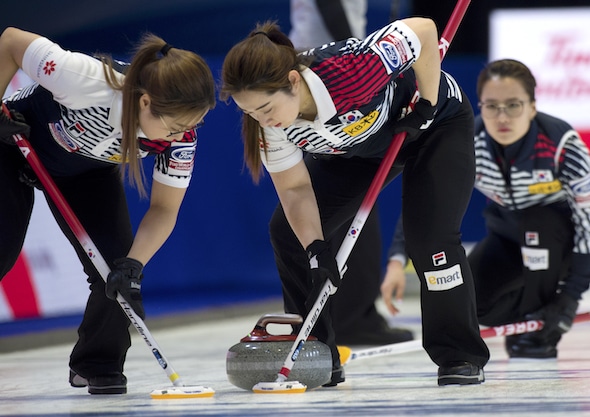 Trailing 7-1 after six ends, Kim and her teammates – third KyeongAe Kim, second Seon Yeon Kim, lead YeongMi Kim, alternate Chohi Kim and coaches MinJung Kim and KyungDoo Kim – made a stunning comeback for the victory. South Korea scored two in the seventh end, stole singles in the eighth and ninth, stole two in the 10th when Moiseeva flashed with her final stone, and stole the winning point in an extra end. “I don’t know what happened. I have no words to describe how bad I feel right now,” a dejected Moiseeva said afterwards. “It’s like we’re just gone for the rest of the game (after the sixth end), like we decided the game was over and left the ice. I think if we even left the ice for sure it would be better than this. “We have no excuses to play like that and it’s really bad when the team can be up and just give up that many points. The professional cannot play like that.” The good news for Moiseeva and her teammates is that they advance to the playoffs, no matter what happens in this evening’s final draw. Five of the six spots are set for the weekend playoffs. Jennifer Jones of Canada (11-0) and Anna Hasselborg of Sweden (10-2) finish first and second and earned byes into Saturday’s semifinals. The three other teams advancing are South Korea (8-3), Russia (6-5) and Jamie Sinclair of the United States (6-5). The final spot will go to either Anna Kubešková of the Czech Republic (6-6) or Yilun Jiang of China (5-6) and that will be determined in this evening’s final draw in the round robin.

In the other afternoon games Binia Feltscher of Switzerland (5-7)  scored three in the eighth end to beat Diana Gaspari of Italy (2-10) 7-6, Tori Koana Japan (5-7) scored a 7-5 win over the Czech Republic, playing without Kubešková who was sick, and Hannah Fleming of Scotland (4-7) stole three in the second end en route to an 8-5 win over Sweden. The quarter-finals, involving teams finishing third through sixth, will be played Saturday at 9 a.m. (all times ET). The two winners will advance to the semifinals to play Hasselborg (2 p.m.) and Jennifer Jones of Canada (7 p.m.) who earned byes to the semis. The 2018 Ford World Women’s Curling Championship continues with the evening draw, the final of the round robin, at 7 p.m. ET. Live scoring, standings and statistics for the 2018 Ford World Women’s are available at www.worldcurling.org/wwcc2018/livescores TSN and RDS2 will provide complete coverage of Canada’s games at the 2018 Ford World Women’s. Go to www.tsn.ca/2017-18-curling-broadcast-schedule-1.593081 for the complete schedule. For ticket information for the 2018 Ford World Women’s, go to www.curling.ca/2018worldwomen/tickets/ This story will be available in French as soon as possible at www.curling.ca/2018worldwomen/?lang=fr