The Championship Pools are set in both women’s and men’s pool play as the round robin finished up Monday evening at the Everest Canadian Seniors Curling Championships in Stratford, Ont. 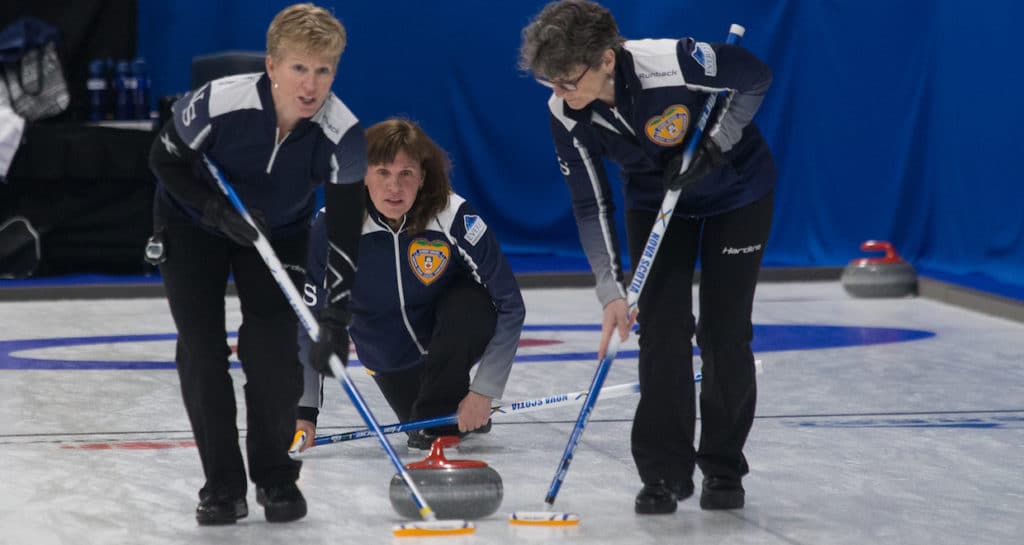 Nova Scotia’s Mary Mattatall finished up the round robin with a perfect 6-0 record after an 8-6 win over New Brunswick’s Heidi Hanlon. Earlier in the day, Mattatall needed two in the final end to win a close 6-5 contest over Alberta’s Terri Loblaw. “We are so pleased with the ice, and felt we have a good read on it early,” Mattatall said, adding that the last few weeks have been key to their early success in Stratford. “The preparation we did for the Nationals is paying off so far. Our plan moving forward is to keep this consistency going into the championship pool.” Ontario’s Colleen Madiona heads Pool B with a perfect 6-0 record, picking up wins against Lynne Noble’s British Columbia foursome, 6-5, and Newfoundland and Labrador’s Diane Roberts, 10-0, in their final two draws of the round robin. Championship Pool play starts Tuesday morning, as the top four teams from each pool move on and play the top four teams in the opposite pool. Rounding out the women’s Championship pool is Nova Scotia’s Mattatall, Ontario’s Colleen Madonia, New Brunswick’s Hanlon, British Columbia’s Noble, Saskatchewan’s Sherry Anderson, Quebec’s Odette Trudel, Newfoundland and Labrador’s Diane Roberts and Peggy Taylor from Northern Ontario. The rest of the teams will play in a seeding pool to determine standing for the next year. In men’s Pool A action, reigning champ Wade White of Alberta finished at 5-1 in a three-way tie for top spot with an extra-end win over Saskatchewan’s Darrell McKee. White’s only loss was to Ted Butler of Buckingham, Que., in the final game of the round robin. “We don’t feel the pressure as much this year,” said White. “Maybe because we won this last year, and with worlds only a few weeks away, we now try to look at it as the best practice opportunity we could have asked for prior to our World Championship, where we’re sure we’ll feel the pressure.”

Joining him in the Championship round from Pool A is Northern Ontario’s Al Hackner, who finished with a 5-1 record. Quebec, finishing with a matching 5-1 record, and Saskatchewan’s Darrell McKee are also through to the Championship pool after McKee downed the Yukon team skipped by Pat Paslawski in an extra end to clinch the fourth spot of Pool A. In Men’s Pool B, Ontario’s Bryan Cochrane took over top spot with a 5-1 record after defeating New Brunswick’s Terry Odishaw 7-4 in a battle of the leaders. “We’re getting better, and the ice is getting better,” said Cochrane. “We’re having a lot of fun out there and that was a big accomplishment to be 5-1, but we still have lots of work to do.” Odishaw and Manitoba’s David Boehmer finished with 4-2 records to grab second and third spot, while the final Championship Pool B spot came down to the final round robin draw between Nova Scotia’s O’Leary and British Columbia’s Craig Lepine. O’Leary came out on top with a score of 7-3 and clinched the coveted final spot in the Championship pool. The Championship pool play continues on Tuesday with draws at 9:30 a.m, 2:00 p.m., and 6:30 p.m., all times EDT. Scores and draw results for the 2018 Canadian Seniors will be available at https://www.curling.ca/scoreboard/. For event information, visit https://www.curling.ca/2018seniors. Story by Robyn Mattie