A Canadian team will be chasing history when it opens play Saturday at Orleans Arena in Las Vegas at the 2018 361° World Men’s Curling Championship, presented by Ford of Canada. 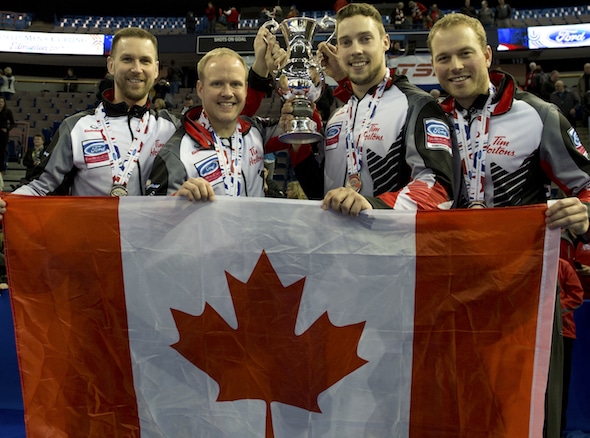 Gushue’s team earned its trip to Las Vegas by winning its second straight Tim Hortons Brier title earlier this month in Regina; Team Canada will open the world men’s championship on Saturday at 4:30 p.m. (all times Eastern) against Russia’s Alexey Timofeev, who played vice-skip on the Alexey Stukalskiy-skipped Russian team that went 0-11 last year in Edmonton.

Team Gushue will be back on the ice later Saturday, at 9:30 p.m. against Scotland’s Bruce Mouat,  the 2016 World Junior Men’s and 2017 Winter Universiade champion, who also claimed top spot at the Grand Slam Boost National earlier this season.

Looming large on the schedule for Team Canada will be a showdown Friday, April 6, at 11:30 a.m. against two-time world champion Niklas Edin of Sweden — a rematch of the 2017 world championship final. Edin also won an Olympic silver medal last month in Pyeongchang, South Korea.

The team the Swedes lost to at the Olympics won’t be in the field in Las Vegas, as John Shuster’s gold-medal squad didn’t play at the U.S. championship. Instead, the U.S. will be represented by Greg Persinger’s team; Canada will take on its southern rival on Thursday, April 5, at 9:30 p.m.

It will be the 60th edition of the world men’s championship; Canada has won a leading 36 world men’s titles, and Canadian teams have reached the podium 52 times in those 59 previous world championships, collecting nine silver and seven bronze to go along with the gold medals.

It will be the first time the world men’s championship has featured a 13-team field, as the World Curling Federation added a third team from the Pacific-Asia zone this past summer.

Round-robin play will run through to Friday, April 6, with the top six teams making the playoffs; no tiebreakers will be played, so ties for playoff spots will be broken based on head-to-head results, and if that doesn’t resolve the tie, then the pre-game Last-Shot Draw distances.

The top two teams from round-robin play will be seeded directly into the semifinals, while third will play sixth and fourth will play fifth in the quarter-finals on April 7.

In addition to the competition on the ice, there will be two significant World Curling Hall of Fame induction ceremonies staged during the 361° World Men’s Championship involving Canadian curling legends.

On April 3 prior to the 4:30 p.m. draw, former World and Olympic champion Kevin Martin will be formally inducted into the World Curling Hall of Fame, and on April 5, before the 9:30 p.m., legendary ice technician Shorty Jenkins will be inducted posthumously; he will be represented in Las Vegas by his daughter Kitty.

TSN/RDS2, the official broadcast partners of Curling Canada’s Season of Champions, will provide live coverage of Canada’s round-robin games, in addition to all playoff games. Go to www.tsn.ca/2017-18-curling-broadcast-schedule-1.593081 for their complete broadcast schedule.

The list of teams, schedule information and live scoring can be found on the event website, www.worldcurling.org/wmcc2018.