LAS VEGAS — In a city to which tourists flock in search of a lucky streak, Brad Gushue and his St. John’s-based Canadian team hit the jackpot Monday afternoon at Orleans Arena. 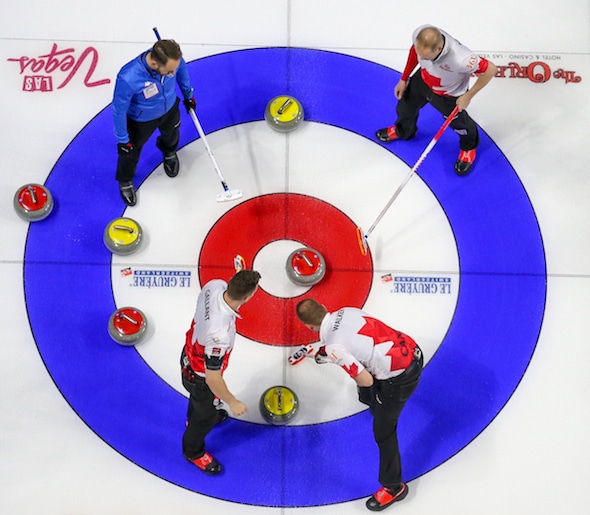 “We were lucky, we were fortunate obviously, for him to miss that last shot,” said Gushue, whose team is rounded out by vice-skip Mark Nichols, second Brett Gallant, lead Geoff Walker, alternate Tom Sallows, team coach Jules Owchar and national coach Rick Lang. “He’s such a good hitter that I didn’t expect him to miss it. So, very fortunate but very proud of how the team recovered after I missed the hit in nine. They made six perfect shots in front of me, and I made two good ones as well to force them into a tough shot.”

That Italy was in the advantageous position of being tied up playing the last end with last rock was due to the ninth-end shot Gushue referred to — an open hit for a go-ahead deuce for Canada that failed to curl as Gushue expected. Instead, the shooter made contact and rolled out of the rings, leaving Canada with just a game-tying single point.

But Walker, Gallant and then Nichols delivered those six perfect shots to set the stage for the skip-rock dramatics.

“We’re a scrappy team,” said Walker. “We seem to always play well with our backs to the wall.”

With the win, Canada improved to 3-1 in the 13-team round-robin standings, part of a four-team logjam for third place with China’s Dejia Zou, South Korea’s Chang-Min Kim and Scotland’s Bruce Mouat.

Norway’s Steffen Walstad and Sweden’s Niklas Edin are setting the pace with 4-0 records.

The Canadians were able to jump into an early lead, taking deuces in the first and third ends, and holding Italy to a single point in between.

But the Italians got back into it with a deuce in the fourth end, and were able to keep Canada to a single in the fifth.

In the sixth, Italy’s hulking Mosaner, all six foot six of him, made a wonderful hit and roll on his first shot, leaving Gushue with a tough double-takeout attempt. Gushue overcurled, failed to remove the Italian counters and rolled his shooter too far, leaving Mosaner with an open draw for three. 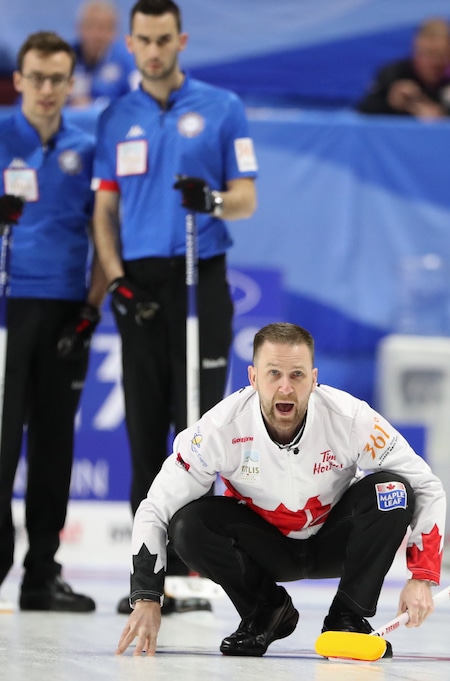 Mosaner struck again in the seventh, throwing a laser-beam double-takeout that snuffed out a Canadian threat and forced Gushue to draw for a game-tying single.

Canada ramped up the pressure in the eighth and was sitting five when Mosaner settled in for his final shot, but the Italian navigated a port and managed to bump a Canadian stone off the button for a single point.

“This feels like house money right now, being in Vegas. We’re pretty fortunate,” admitted Gushue. “Hopefully this will be the springboard we needed to start like playing like we’re capable of playing. Certainly, up to this point I don’t feel like we’ve been that way, and me in particular, I don’t feel as sharp as what I normally play.”

Canada faces a pair of games on Tuesday, taking on South Korea’s Chang-Min Kim (3-1) at 11:30 a.m. (all times ET) and Japan’s Go Aoki (1-3) at 4:30 p.m. — the first of four straight two-game days, which Gushue hopes will help kick his team into its normal competition rhythm.

“I think so,” he said. “This whole Vegas thing — I don’t want to say it’s a distraction, but it’s hard to get in a routine. Usually, at an event, it’s easy. You hop in a car, you drive to the rink, and you get in the routine. Here, it’s hard to get away from the event. Even at the hotel, all the fans are there and you can’t get away. We have to find a way to get into a better rhythm, and I think (starting to play) two games a day is going to help. But even outside of that, we have to find a better strategy to just get away from the event, get away from curling. That’s one thing we do really well when we’re at a Brier — when we leave the rink, there’s no curling. After our debrief (meeting), we don’t talk about it, we don’t think about it until we show up at the rink for our next game. That’s hard to do here.”