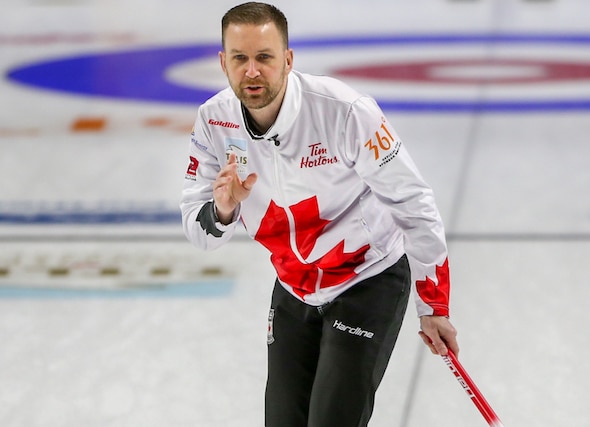 But in the end, it was Canadian skip Brad Gushue sealing his team’s third straight victory at Orleans Arena on Tuesday morning, drawing to the four-foot for the winning point in an extra end for a 7-6 triumph over South Korea’s Chang-Min Kim.

“It’s getting better, for sure. We still have a ways to go, but certainly I like the progression over the last couple games,” said Gushue, whose team is seeking a second straight world men’s gold medal. “Even though it was a real tight game, they’re a tough team. They played really well against us and pushed us right to the limit, and fortunately we were able to make that draw to the four-foot.”

Canada had another fast start; despite not having last-rock advantage to open the game, the Canadians were able to jump into a 3-0 lead thanks to a stolen single in the second end and a theft of two more in the fourth.

But South Korea (3-3) hung tough and fought back to force the extra end with deuces in the fifth, eighth and 10th ends.

In the end, though, Gushue’s team played a near-perfect 11th to leave him the open draw to the four-foot.

“It seemed like it was just one missed shot in the three ends where we gave up the deuces,” said Gushue. “Outside of that, I thought we played really well. Still a couple of wrong-side misses, which we need to clean up, but definitely our best game so far, I felt. Overall, pretty good, but I certainly think we can bring it up to another level.”