LAS VEGAS — It was a loud crowd Thursday night at Orleans Arena for the Battle of North America, and it was the home-country fans who went home happy. 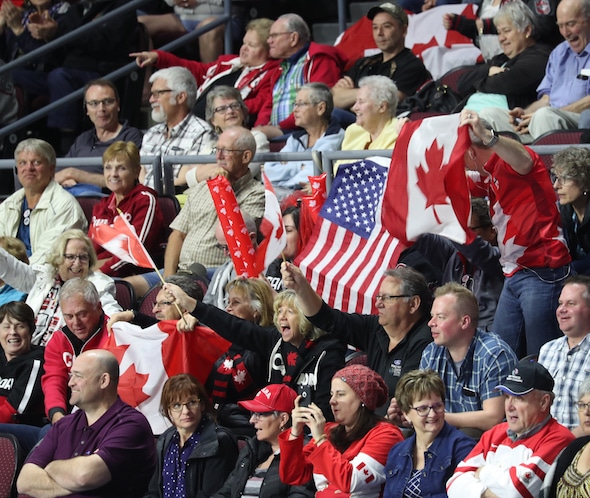 Canada’s Brad Gushue team from St. John’s saw its seven-game win streak at the 2018 361° World Men’s Curling Championship, presented by Ford of Canada, come to an end with a 6-5 loss to Rich Ruohonen of the United States.

Canada dropped to 8-2 with the loss, while the U.S. improved to 4-6, still mathematically alive for one of the six available playoff spots.

U.S. last-rock thrower Greg Persinger coolly drew to the four-foot for the win, with Canada, which had tied the game 5-5 with a ninth-end deuce, sitting two counters at the top of the 12-foot.

“They played a great game; certainly deserved to win,” said Gushue. “It’s a little bit frustrating at times when we’d miss a shot by an inch and get a terrible result; they’d miss by a foot and get a rosy result. I got a little frustrated at a couple points in the game, which probably didn’t help us.”

He had cause to as his team — vice-skip Mark Nichols, second Brett Gallant, lead Geoff Walker, alternate Tom Sallows, team coach Jules Owchar and national coach Rick Lang — failed to generate much in the way of momentum, and never managed to take control against an inexperienced U.S. team.

Canada had some early success, generating a second-end deuce after the U.S. opened the scoring with a first-end single.

But the U.S. reclaimed the lead with one in the third end and a steal of one in the fourth when Gushue’s long runback for potentially three overcurled.

Canada was forced to a single in the fifth, and after a blanked sixth, the U.S. scored a pair in the seventh to put the Canadians into chase mode.

Canada had a shot at a game-tying deuce in the eighth but Gushue’s draw to sit two on his first rock was light (“That’s the one I’ll be kicking myself about tonight,” said Gushue), allowing the U.S. out of trouble; Canada would end up blanking the end.

The Canadians tied it with the ninth-end deuce, but the U.S. played a near-perfect 10th to leave the four-foot available to Persinger.

“I don’t think we played that bad, I really don’t,” said Gushue. “I feel like they just outplayed us and some of those breaks went against us. I don’t think we can walk away and be too upset at how we performed and how things happened. It just seemed like it wasn’t meant to be. They played really well, so you have to give them credit and we will give them credit.”

The loss effectively ended Canada’s chances to finish first in the round robin, but the Canadians will still finish second with wins Friday against Sweden’s Niklas Edin (9-1) at 11:30 a.m. (all times Eastern) and Germany’s Alexander Baumann (1-9) at 9:30 p.m.

“Pretty easy approach,” said Owchar. “If we had won (Thursday night) and beat Sweden and Ge 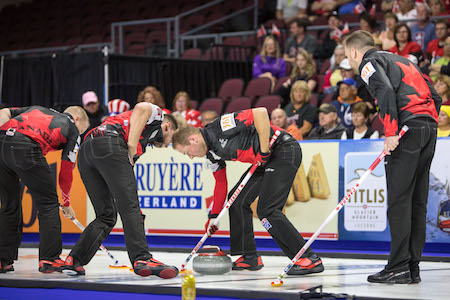 “There are still implications tomorrow,” added Gushue. “And obviously we have enough pride that we’re going to try to win all of them.”