LAS VEGAS — It was a gold-medal rematch that lived up to its advance billing on Friday morning at the 2018 361° World Men’s Curling Championship, presented by Ford of Canada. 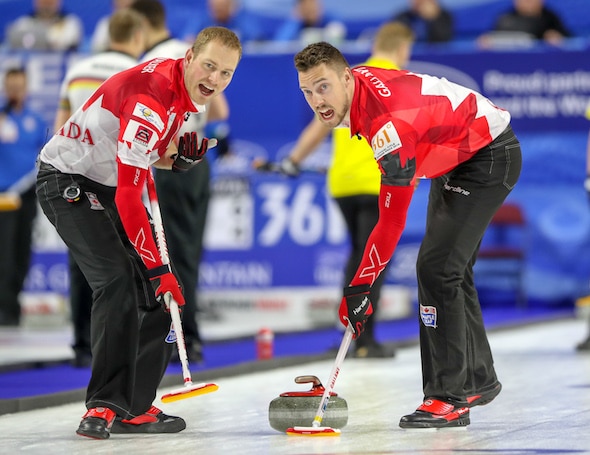 A year ago in Edmonton, Canada’s Brad Gushue capped an historic 13-0 run through the 2017 Ford World Men’s Championship by defeating Sweden’s Niklas Edin in the gold-medal game.

Friday at Orleans Arena, it was Edin’s Swedish team coming out on top, with a thoroughly entertaining 6-5 victory over Team Gushue that wasn’t secured until Edin drew to the four-foot with his final delivery of the 10th end.

With the win, Sweden improved to 10-1 and nailed down a bye directly to Saturday’s semifinals, while Canada dropped to 8-3 — guaranteed of third place in the 13-team round-robin standings and knowing it will play in Saturday morning’s quarter-final against the sixth-place finisher.

Edin took advantage of two first-end miscues from Canadian vice-skip Mark Nichols, making a runback double takeout to score three to open the game, and put Canada in a hole early on.

“It was a horrible start by me; I didn’t play very well, the first four or five ends, and the guys hung in there as much as we could and finally started putting pressure on them,” said Nichols. “We played a really good last five ends, we put lots of pressure on them. We just have to do that for the full game.”

Canada kept digging and finally managed to pull back even in the game with a stolen deuce in the seventh end when Edin was wide on his double-takeout attempt.

In the end, though, the Swedes managed to hang on for the victory.

“Outside of the three, I thought we were as good (as Sweden) or better,” said Gushue. “We put some pressure on them in a number of ends. Niklas himself played real well. But I liked everything about that game other than our start.

“It was just two shots (in the first end), really. That’s all it was. I feel like — well, I know we’re the best team in the world. It’s not a matter of feeling it. So I knew that we would outcurl them for (the final nine ends). It’s just that three is a lot to spot them. But I felt we could grind back.” 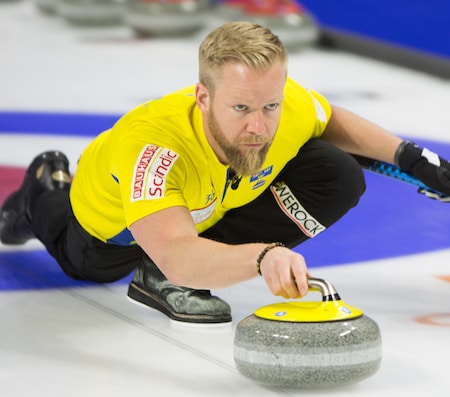 Canada will complete its round-robin schedule later Friday against Germany’s Alexander Baumann (1-10) at 9:30 p.m. (all times ET), looking to generate some momentum going into the playoffs.

“Tonight’s game doesn’t mean a whole lot in the standings; for us, it’s about going out there and working on a few things and see if we can sharpen up a little bit,” said Gushue. “If I’m going to look on the bright side, if we get through the quarter-final and semifinal, obviously you’re going to build some momentum. In any bonspiel, anybody would tell you they’d love to come through the C-side, if you guarantee that you get through, because you get to play more and stay sharp. That’s the positive. But unless you can guarantee to me that we’re going to get there, I’d rather be (directly) in the semifinal.”

Round-robin play concludes Friday with the top six teams making the playoffs; no tiebreakers will be played, so ties for playoff spots will be broken based on head-to-head results, and if that doesn’t resolve the tie, then the pre-game Last-Shot Draw distances.

The top two teams from round-robin play will be seeded directly into the semifinals (4:30 p.m. and 9:30 p.m. on Saturday), while third will play sixth and fourth will play fifth in the quarter-finals on Saturday morning at 11:30.