LAS VEGAS — Team Canada lost three round-robin games at the 2018 361° World Men’s Curling Championship, presented by Ford of Canada, and potentially has the chance to avenge all three defeats in the playoffs at Orleans Arena. 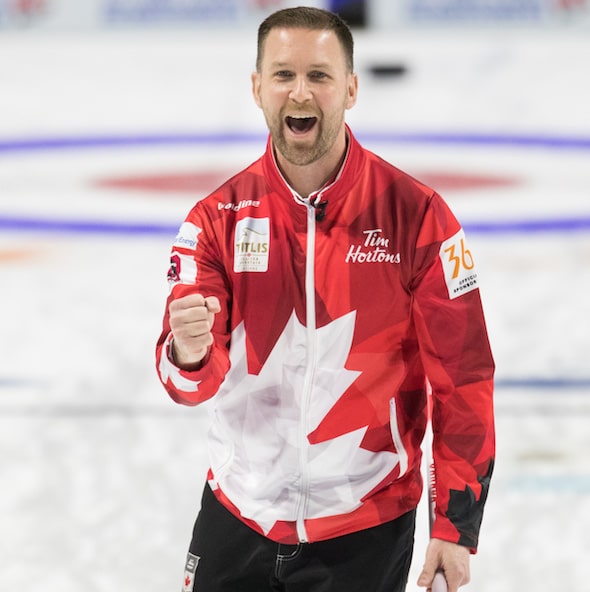 Brad Gushue’s St. John’s team took care of one of the teams on that list on Saturday morning in the quarter-final, defeating Rich Ruohonen’s U.S. squad 6-4, with Gushue making a draw to the four-foot in the 10th end for the victory.

Next up is Scotland’s Bruce Mouat in the semifinal Saturday at 9:30 p.m. (all times ET), and potentially waiting in the gold-medal game could be Sweden’s Niklas Edin.

But for now, the focus is on wiping away the perspiration that came as a result of high humidity in the arena that led to frosty ice conditions — conditions the Canadian players knew they were in for the moment they stepped into the arena early Saturday morning.

“I looked over at Sheet D (which was covered in frost before the game), and I was like, ‘Holy (crap).’ I knew (the frosty conditions were) coming,” said Gushue, whose team is rounded out by vice-skip Mark Nichols, second Brett Gallant, lead Geoff Walker, alternate Tom Sallows, team coach Jules Owchar and national coach Rick Lang. “As soon as I felt the ice, for probably the sixth time this week it had a different feel under the foot. I knew it was going to be a challenge for us to learn it, and it wasn’t something we could rely on from other games.”

But the Canadians managed to adapt, using a more defensive game plan than they normally employ — helped along by an early lead, thanks to scoring one in the first end and stealing one in the second when U.S. last-rock thrower Greg Persinger was just heavy on his last-rock draw.

“We took a real defensive approach today, and I think having the hammer to start the game was a really big difference for us. I felt like we were able to have that one or two-point lead for most of the game, which allowed us some control,” said Gushue. “It was a grind; it’s really, really hard out there, and you have to discuss every shot. We did great, I thought, for the conditions we faced. I thought we made a lot of good shots. Still some mistakes,  but a lot of those were related to ice conditions as opposed to mental or technical mistakes.”

The U.S. managed to even the score with a deuce in the seventh end, but Gushue manufactured a skip’s deuce in the eighth end — making a delicate inturn tap to the four-foot for the second point.

The U.S. was forced to take a single in the ninth, and shot stone buried in the eight-foot when Gushue settled down for his final delivery of the 10th end. 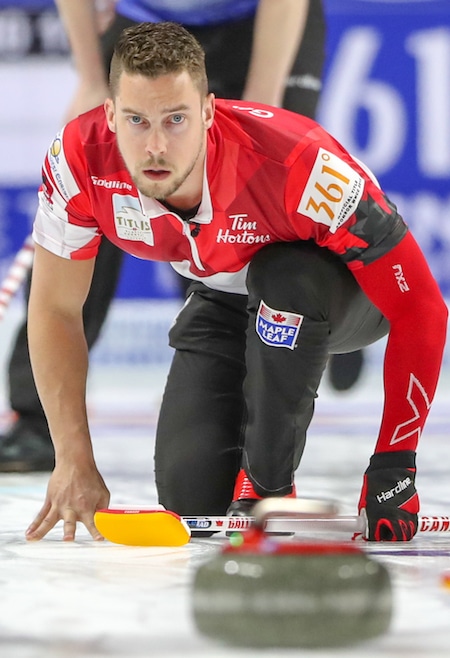 “It was a big win in really tough conditions,” said Gushue. “We battled hard, and it was probably the toughest draw to the four-foot I’ve ever had to make in my life.”

Next up are the young Scots, skipped by Mouat — just two years removed from winning the 2016 World Junior Men’s Championship.

“It really comes down to ice. If we can get some consistent ice with some curl, I really think we can go ahead and be aggressive and force them to play some finesse shots, and use our strengths,” said Gushue. “If it like it was this morning? It’ll be a fight to get the hammer back and hopefully tied up coming home with (last rock) . . . But we can still win under these conditions. We can play on bad ice conditions as good as anybody.

“If the ice is the same tonight, I think our experience will be an advantage. It took us a few ends to get used to it, and it’s a different feel. We might be able to catch them in a mistake here or there, based on them learning the ice. And I think our experience coming down to the last couple ends (will help). We’ve been in a lot of big games — a world semifinal, if we get to the eighth, ninth, 10th end in a tight game, I think for them the screws will tighten a little bit more than they will for us. We’ve been there and been successful, and if we don’t win, it’s not the end of the world. For them, it will feel like the end of the world.”

In the other quarter-final on Saturday morning, South Korea’s Chang-Min Kim was a 7-5 winner over Norway’s Steffen Walstad. With the win, the Koreans move into the semifinal at 2:30 p.m. Saturday against Sweden.

The semifinal winners will play for gold Sunday at 8 p.m., while the losers will meet for bronze Sunday at 3 p.m.

All of Canada’s games are being broadcast by TSN. Go to www.tsn.ca/2017-18-curling-broadcast-schedule-1.593081 to see the broadcast schedule.