LAS VEGAS — It’ll be a gold-medal rematch Sunday at the 2018 361° World Men’s Curling Championship, presented by Ford of Canada. 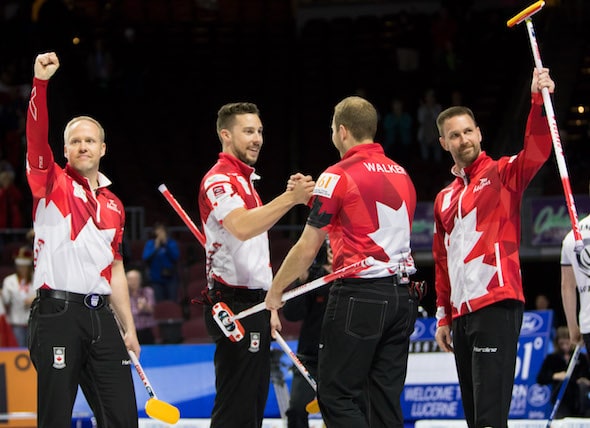 The Canadians reached the gold-medal game with a pair of playoff victories on Saturday at frosty Orleans Arena, capping their perfect day with a thrilling 9-5 win over Bruce Mouat of Scotland.

“I feel great,” said Gushue. “I thought it was a great game, and I thought we handled the ice as well as we could. We made some big shots, and it was a good win.”

Gushue delivered two of his most important shots of the 2018 World Men’s back to back in the seventh end on Saturday night — two precision runback takeouts that put a three on the scoreboard and gave Canada a 7-5 lead, prompting a frenzy of raucous cheers from the pro-Canada crowd.

But while those runbacks were highlight-reel material, it was Gushue’s clutch draw to the four-foot — routine under most circumstances — for a single point in the fifth end that should stand out as among his most crucial shots of this event.

It came on the heels of a huge break for the Scots when Mouat was narrow on a takeout attempt to get out of a situation that likely would have resulted in four, maybe five Canadian points. But Mouat’s shooter barely rubbed on a guard, removed a Canadian stone, and then rolled corner-frozen to Canada’s shot-stone, and buried to boot.

A seething Gushue had to settle his nerves to make the draw for a single point to tie the game 3-3 at the break.

“It was way bigger (than the runbacks in the seventh),” said Gushue, who earlier on Saturday was a 6-4 winner over Rich Ruohonen of the United States in the first round of the playoffs. “I was pretty hot, and I had to cool myself down to make that. It would be real easy to throw that to the back of the eight-foot, and probably earlier in my career, I would have. Those runbacks, it was just a matter of hitting the broom. Out of my hand, it was just hoping the guys didn’t fall on it, really. The one in five — I was a little bit concerned.”

“If we don’t make that, we’re down two,” added Nichols. “After a shot goes that way (for Scotland), you just have to collect yourself and make sure you make that shot. If you don’t you’re really struggling to get back into the game.” 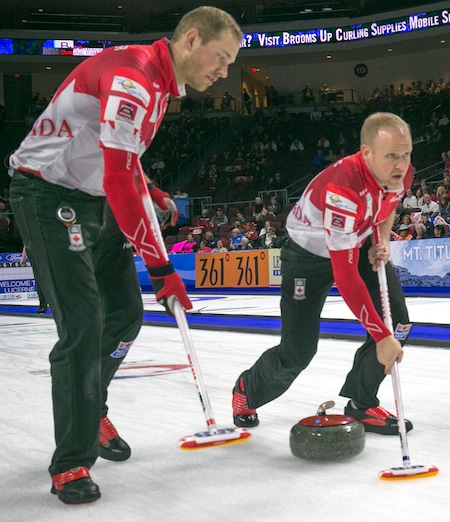 Gushue finished the game scored at 94 per cent.

“You could see it in his eyes tonight,” said Nichols. “We were all pretty into it. It was just about, don’t get in each other’s way. And don’t get in Brad’s way when he’s seeing those shots.”

The Swedes reached the final earlier on Saturday with a 9-8 extra-end win over South Korea’s Chang-Min Kim. Sweden beat Canada 6-5 in their round-robin game on Friday morning, on the strength of a first-end three.

“It will be a tough game,” predicted Gushue. “Niklas and his team are a great team, one of the best in the world, They have hammer starting out, so I think for the first five ends, it’s going to be about wrestling the hammer back. I certainly expect a tight game and for it to come down to last rock.”

Team Gushue will try to become just the fifth team, all of them Canadian, to successfully defend a world men’s championship.

Scotland and South Korea will play for the bronze medal Sunday at 3 p.m. ET.