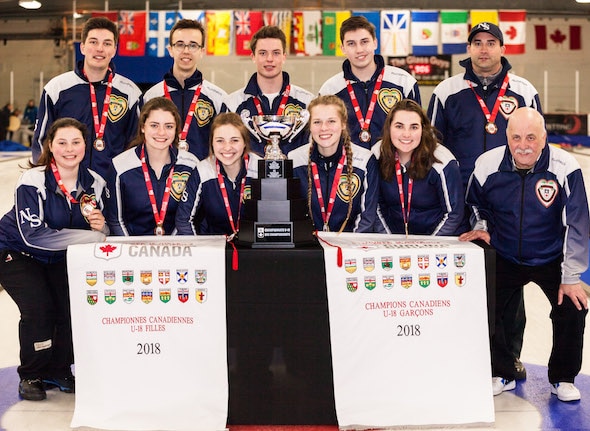 Nova Scotia teams claimed both gold medals at the 2018 Canadian Under 18 Boys and Girls Curling Championships — the second straight year one Member Association has swept both the girls and boys titles after Northern Ontario did it last year in Moncton.

Nova Scotia (Weagle was backed up by vice-skip/last-rock thrower Owen Purcell, second Jeffrey Meagher, lead Scott Weagle and coach Anthony Purcell) was 3-2 in the round robin before rattling off four straight playoff victories.

“Being our first national championship competition, we struggled a bit at the start to get used to the ice and the atmosphere, but by the playoffs, we kind of adjusted to it and settled in, and we focused,” said Weagle. “The guys brought their ‘A’ game today.”

That was evident in the early ends; Nova Scotia opened the game with a deuce, and held Alberta to a single in the second.

In the third, Nova Scotia simply made eight perfect shots and took advantage of key misses from the Albertans to put five on the scoreboard — capped by Purcell making a delicate outturn tap to remove a partially frozen Alberta stone and hold the shooter.

Nova Scotia added a steal of three in the fourth and it was just a matter of time before the gold medals were draped around the Bluenosers’ necks.

“It feels amazing, it’s unbelievable — it’s a dream of mine,” said Weagle. “The guys worked so hard, and we’re pretty proud of ourselves.”

“When I saw Mary Fay win a national title, I was like, wow,” said Weagle. “From a small town like Chester, to produce a national (and then world) champion, it’s crazy. And to now be a national champion is even crazier.”

Saskatchewan blanked the first three ends before cracking a deuce in the fourth. But Nova Scotia came out strong after the fourth-end break, tying the game with a deuce in the fifth end, and then stealing two in the sixth.

“We started to be aggressive, and it obviously worked out,” said Ladouceur. “We definitely made some nice shots; Saskatchewan made some amazing shots, too, but it just worked out in our favour, with a little bit of luck.

“It feels fantastic; my team has been working for this all season, and we’re just really excited right now.”

“We know that we want to win, and we’re willing to work hard,” she said. “Everyone here in Nova Scotia is trying to be the best, so we have a lot of hard workers in our province.”

In the girls bronze-medal game, Alberta’s Ryleigh Bakker (Calgary) scored three in the eighth end for a 5-3 win over Ontario’s Madelyn Warriner (Listowel).

Meanwhile, the doubles competition wrapped up on Saturday for players who didn’t take part in the playoffs.

In the gold medal-game, featuring a pair of mixed teams, the duo of Jaycee Terrick (Manitoba) and Braden Fleischhacker (Saskatchewan), with coach David Murphy (P.E.I.) was a 4-2 winner over Lauren Ferguson (P.E.I.) and Troy Chong (B.C.) with coach Dave Trickett (Newfoundland/Labrador).

The all-girl duo of Melodie Forsythe (N.B. Host) and Alexa Smallwood (Yukon), along with coach Verne Anderson (Saskatchewan) won the bronze medal with a 5-3 victory over the mixed duo of Lexie Murray (P.E.I.) and Jayden Bindig (Saskatchewan) with coach Bryan Miki (B.C.)

Also on Saturday, the Balance Fair Play Awards (as voted on by the umpires) were handed out:

Players and coaches voted on the Sportsmanship Awards. The winners were as follows: