Canadian Senior Curling champions Sherry Anderson and Wade White got off to a strong start on Saturday at the 2018 World Senior Curling Championships in Östersund, Sweden. 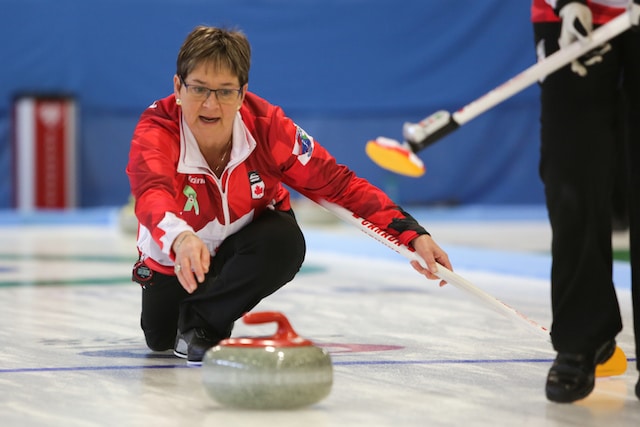 Skip Sherry Anderson calls right away to her sweepers after releasing her rock on the first day of competition at the 2018 World Senior Curling Championships in Östersund, Sweden (WCF/Tom Rowland photo)

Saskatoon’s Anderson, backed up by vice-skip Patty Hersikorn, second Brenda Goertzen, lead Anita Silvernagle and coach Bill Tschirhart, ran up an early lead on the way to an 11-2 win over Lithuania’s Rasa Veronika Jasaitiene in the opening game of the women’s round robin. The Canadian women scored four in the first end and followed that up with steals in the next two ends, taking an 8-1 lead into the break. But despite the apparently easy win, Anderson was cautious about the team’s performance in the round robin opener. “As a start it was okay,” said Anderson. “I felt we played pretty good. We didn’t play spectacular and had some misses but I thought we were throwing them okay and made some good shots. That’s how you want to start so you can build from there.” “We had a good handle on the ice,” she added. “That’s what you want to build on from the first game and feel comfortable going into the second game, so we’re right where we want to be.” The Canadian women will face Russia’s Tatiana Smirnova (0-1) on Sunday at 2 a.m. ET. On the men’s side, White and his Edmonton team of vice-skip Barry Chwedoruk, second Dan Holowaychuk, lead George White and coach Bill Tschirhart had an equally easy start, scoring big ends and holding France’s Pascal Adam to singles in an 7-3 win. 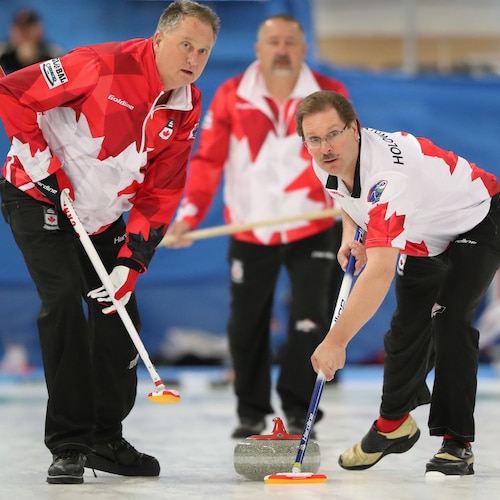 “I’m pretty pleased with that,” said White. “It wasn’t the perfect game, but we got things done, made the right shots at the right time. We’re a little rusty but it’s not that bad. We’re just trying to get used to the ice, that’s what it’s all about. So far, so good, that’s what we want – one win.” The Canadian men will face Switzerland’s Dieter Wueest on Sunday at 6 a.m. ET. Both Canadian teams won the right to represent Canada in Ôstersund by winning gold at the 2017 Everest Canadian Seniors in Fredericton, N.B. You can find information on schedules and team line-ups at www.worldcurling.org/wscc2018